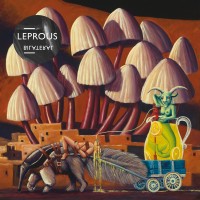 
2011 proved to be a smorgasbord of interesting progressive metal acts, so much so that it was extremely difficult to keep up with the near constant influx of exhilarating, perplexing and fascinating material. When a progressive metal band attempts to release their own music into such a diverse and lively atmosphere one thing above all else is imperative to their receiving of your attention. Mushrooms! But seriously while that is some eye grabbing cover art which adorns Leprous' latest album Bilateral what is it about the music within that brings the band to the forefront of such a prosperous year for progressive metal?

As I'm sure you've already figured out, originality is the key to success within this genre and that is something which marks Leprous out from their progressive metal compatriots. A clearly identifiable sound that leaves the listener instantly aware of the band's sense of self conviction. With a pristine production the album is free to clearly unleash an astonishing array of intricate complexities which unfold before you which are impossible to comprehend given a single listen.

This is an album that demands your attention and will not let you go until it's thoroughly had its way with your mind. From the jarring keyboard, rapid drums and near screaming vocals of "Waste of Air" to the display of guitar wizardry on the album epic "Forced Entry" or the laid back and melancholic "Mb. Indifferentia" this album rarely fails to amaze. To top it all off there is a guest appearance by Ihsahn on what is certainly an album highlight "Thorn". Aptly titled it sticks right under your skin and is tantalising to say the least, the band even having the audacity to make use of trumpets to add to the unpredictability of it all.

The sheer wealth of ideas present on this album shows a band in top form, the ability to create and successfully convey these ideas is no easy task and is something really noteworthy about Leprous. What's more their ideas are very much their own, with little resemblances in the music betraying their inspirations. The occasional impressions of Pain of Salvation, Tool, Porcupine Tree, Opeth and Dream Theater become apparent but each only fleetingly and never overstaying their welcome. Take the best features of these bands, mix and stir thoroughly and you have an interesting concoction. Quite a potent one at that which requires very talented musicians to pull it off, and Leprous is never too shy to add large portions of their own secret ingredients to the mix.