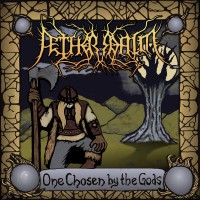 
Æther Realm are a band from Finlan-… Swe-… Germ-… Really? They're from the United States?

Well you'd never know from hearing them, but yes this band calls it's home America. They are the inevitable effect of how far metal bands spread around the world in the internet era. In the 80's, it was different and the bands from different places in the world had a unique local sound. Floridian death metal bands sounded like they came from Florida. Norwegian black metal bands sounded completely different than the ones from Sweden or Germany or wherever. And in the late 90's/early 00's, the Finnish folk metal scene exploded into what it is today.

The aftermath of the internet's influence on the global metal scene is obviously evident in Æther Realm. They are as close sounding to a Finnish folk metal band as an American metal band could be. From the melodies, to the vocals, to the orchestral/symphonic background complimenting all of it. Miss Jari in Ensiferum? A big fan of Wintersun but can't seem to find another band that sounds similar? A fan in general of the folk metal scene? Listen to this album. You will like it. It really is as simple as that.

There are two ways to think about it. You could consider them another welcome addition to an already flourishing scene that brings at least enough originality to be able to find a niche, or you can think of them as an Ensiferum clone. Both would be right. Every person you show this album to will say something along the lines of "this sounds like Ensiferum". No, they are not the most original sounding band but they write good songs and that is enough for me and for fans of Æther Realm. There isn't one filler song on One Chosen By The Gods. "Oak" and "Hourglass" are both really strong in my opinion. The song "Æther Realm" has a weak chorus, but being that it is the second shortest song on the album, it doesn't drag anything else down with it. The bigger question is what the future holds for them. Will they continue on the way to being just another folk metal band? Or will they add something to a bloated scene?

There is enough talent there to suggest the latter.