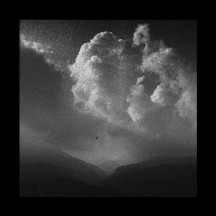 
"I believe this is hell; that I will suffer even after I die- eternally". Well, after that opening line I feel like quoting the great Dax Riggs: "If this is hell, then I'm lucky".

I've been following Yayla's career ever since the sophomore album Sathimasal came out back in 2012 along with Chaoscunt's other brainchild, Blliigghhtted. I vividly remember getting lost in the fuzzy, bassy and highly entrancing black metal of Sathimasal. It displayed an odd sense of melancholia and despair, as if something more abstract and greater than the individual was in danger. Pas.to.rale on the other hand feels very human and even down-to-earth at points which reflects on the music as well. Yayla now focuses on a greater sense of melody and rhythm (as in the catchy beginning to "Mantras Of Separation") and less emphasis has been put to bass and fuzzy, disorienting riffs. These sorrowful melodies are accompanied by desperate lyrics that yours truly relates to a homesickness of sorts.

From the very beginning we are treated to raw melodic riffs that pay homage to the classic acts from the 90s while avoiding feeling too familiar. This might be because different themes revolving around black metal culture are mixed homogenously. Pas.to.rale is plagued with ritualistic instrumentals that almost take over half the running time of the album. These tracks lead the way to ghostly, slow and punishing riffs that evoke strong depressive/suicidal vibes, at times similar to Xasthur's work, that eventually erupt into more chaotic tunes producing a more "classic satanic" atmosphere related to older acts of this genre.

It's in these introductory instrumentals that plenty of experimentation can be found, "Pandora" being my personal favorite with keys that remind me of old Burzum juxtaposed with drumming that is highly erratic at times. Some of the organ-sounding keyboards are almost circus-like (both in "Pandora" and "Rats") and add further sense of confusion and uncertainty which seems to be the main theme of the album once all the changes in mood are considered.

My only gripe with this album is "They Are Losing You From Me" which to me does not work as a closer, unlike the title track with its great melodic riffs that almost made me think of Wolves In The Throne Room for a second. All in all, Pas.to.rale is a very multifaceted album that has plenty of material for everybody in love with this versatile genre, from the traditional to the experimental.