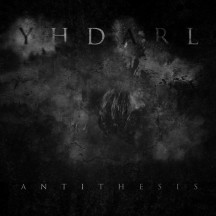 
Periphrasis: a literary device in which inflated, circumlocutory language is employed in the place of a more succinct explanation purely for the sake of being tortu(r)ously oblique, much in the same way that we have all padded out writing assignments with minimum word counts by abandoning the concept of efficiency.

Drone: that, but music.

This album is five hours long.

No, I didn't listen to it all in one go.

There I was, finishing up Bell Witch's 84-minute masterpiece Mirror Reaper, thinking, "Boy, this is the longest album I've reviewed in a while!" Then, suddenly, at dawn I looked to the east and found cresting the hill some gargantuan slab of absurdly dense drone called Antithesis [Of All Common Decency]. This album came out back in January (legend has it that someone out there has almost fnished listening to it), so I'm a bit late to the party, but it's never too late to jump on an album that, as far as I know, is still being recorded as we speak.

Let's be honest: the first, last, and only thing you need to know about Antithesis is that it's five hours long. Everything else is just an irrelevant footnote. And yeah, obviously it's a drone-type album, because you don't see ska bands blowing their trumpets until their lungs explode or punk bands struggling in vain to discover a fourth guitar chord after hours and hours of the same three. Even prog is afraid of Yhdarl now. You could listen to Dopesmoker, Absolutego, The Great Barrier Reefer, Crimson, AND Light Of Day, Day Of Darkness in the time it would take you to finish Antithesis. You could listen to every single song that Minor Threat has ever recorded six times over. You could watch part of the Extended Edition of one of the Lord of the Rings films. I guess that one's not as impressive-sounding.

But I've had my fun. Let's talk about the actual music now. Antithesis isn't all drone; starting as early as track two, "Everything Is Futile - Suffocating In Pestilent Air," Yhdarl kicks into the characteristic plod of funeral doom. The overbearing distortion and minimal low end pull Yhdarl away from the deepest reaches of doom, while the demented snarls and distinctive chord progressions are obviously rooted in black metal, producing the type of mixture we have previously heard from the band. The way they hold onto those chords like their lives depend on them, however, makes it clear that these Belgians are still aiming for the atmospheric overhang of drone more than anything else.

Antithesis cycles through stages of drone, blackened doom, regular (by which I mean funeral) doom, dark ambient, and combinations of the lot, wafting from deadly, putrid sound to deadly, putrid sound as the current carries it. Whatever the style, Antithesis is at any given moment a vault of menacing perturbation, replete with waves of crackling feedback and protracted groans suitable for any haunted asylum or horror film set therein. I'll be honest, though, it is mostly drone, and the other stuff kind of goes away by the second half. I can't remember what happens when, but I'm sure as hell not going to go digging through five hours of raw refrigerator-core to get you guys time stamps or anything. It's still good, though.

The sheer spectacle of having a five-hour-long album is obviously going to turn away potential listeners in droves, but once you've made amends with the foolishness of this format, Antithesis is a pretty decent elephantine obelisk of noise. There's no pressure to genuinely sit through the whole thing at once, anyway; like any atmosphere-heavy album, it's quite easy to throw on a track or two of Antithesis and experience it in measured chunks.