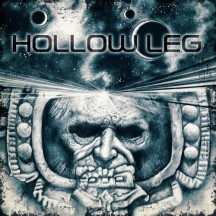 
A lot of bands are ambitious and try to mix genres in creative ways or move sounds forward. Hollow Leg are just sludge. Damn good sludge.

A few miles east of where this sound was actually popularized, Florida brings us Hollow Leg, a quartet who have apparently been around for quite a while since Civilizations is their fourth record. "Hollow leg" supposedly means someone who can consume massive quantities of alcohol and with not much sticking out as far as their history or background are concerned, I'll just get right to the music. I think I've made it quite clear that this is sludge but, to be even clearer, this is of the classic sludge sound, reminiscent of Eyehategod or Crowbar or High On Fire, instead of the hardcore/noise infused stuff like Primitive Man or Amenra.

This means, of course, that a lot of the album sticks to that mid-slow pace that really requires some massive riffs to keep it going, which Hollow Leg happily deliver. What they miss in unadulterated aggression or the punishing atmospheres that the more recent sludge sounds have, they make up for in being extremely fucking groovy and bludgeoning in a fuzzy way. Civilizations is obviously still aggressive and there are mountain-leveling riffs at play, but it feels so invigorating and bracing that you can't help but instinctively bop your head. Especially with these Clutch-esque raspy, but decipherable, vocals.

Hollow Leg try their hand at mixing up their sound with the acoustic and clean interlude "Black Moon", which honestly sticks out like a sore thumb instead of providing some kind of diversity of sounds. The diversity of sound would be there without it anyway due to some songs being more on the stoner-ish side (like "Hunter And The Hunted") and some being way more aggressive in their riffs ("Akasha"). There's also the fact that somebody probably screwed up the tracklist and they didn't bother to fix it, so we're stuck with a track named "Intro" right in the middle of the album. But there wasn't really that much need for diversity as the sound itself is so dynamic due to how amazingly the production fits it and gives it so gigantic a punch.

Civilizations has no need for petty innovation, when it's so groovy and rejuvenating on its own, with a sound so massive and so classic.

Written on 05.04.2019 by
RaduP
Doesn't matter that much to me if you agree with me, as long as you checked the album out.
More reviews by RaduP ››