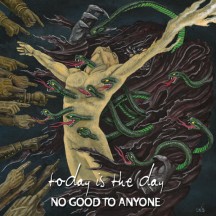 
To crawl out of a hellish hole with love in your heart is not easy to endure. But then again, Today Is The Day have never been easy to listen to.

While approaching 3 decades of existence, it would seem like Today Is The Day have nothing to prove. Commanded by the one-of-a-kind Steve Austin, the project has a solid reputation of consistent displays of maniacal noise rock. The metal touches have also provided the project with the opportunity to perform with acts ranging from Motörhead and Morbid Angel, to Neurosis and The Melvins. There is a very distinct "jack of all trades" aspect with TITD: There are introspective slow burners of riffs and acoustic chords are mixed with rocking, catchy bangers. And then there is also the madness in the form of chaotic, blasting fury, and of course one of the most recognizable voices in the underground scene.

No Good To Anyone starts its doomed engine with the title track, the disorienting riffs pummel along slowly, but surely, like a funeral march. All of a sudden the album grabs me by the throat with a wall of riffs and blast beats that bleed anguish. It's almost black metal but far more decadent with the painful, sinister shrieks and agonizing cleans of Steve Austin. I can't stress enough how menacing he still sounds after all these years. He sounds a bit less insane but I'd prefer to call it "restrained and brooding". In moments of chaos, the riffs take the backseat, letting the warm and pulsing bass take over and envelop the listener. The ongoing capture-and-release structure of the first track is one of the things that define TITD the most, and that song nails it perfectly.

As I got deeper into the album, I felt a transition into noise rock territory. Tracks like "Burn In Hell", "You're All Gonna Die" and "Mercy" carry the tried and true sound of the project with some of the catchiest grooves coupled with distressing vocals, and are some bursts of speed that will get your blood pumping. There are quite a few surprises on the way though. Moments like the second half of "Son Of Man" or "Callie" are almost psychedelic in nature and the two short interludes, "Orland" and "Agate", provide a more than welcome breathing room.

Finally, the last few songs of the album approach a very different and moody take on the project's formula. "Born In Blood" and "Mexico" have a very doomy, yet highly emotional, vibe. The mournful soloing on the former carries a huge sense of loss. This is further built upon by the last track that explores an ambient, shapeless structure. It's surreal, both dreamy and nightmarish.

No Good To Anyone is probably Today Is The Day at their most melancholic and exposed. It's not hard to see why, given the tragic car crash and subsequent health issues that have plagued Steve Austin for a long time now. Yet this album stands tall and proud, defiant… Just like the human figure on that inspiring artwork by Jef Whitehead.

I'll leave you with Steve Austin's own words about his latest album:

"You will not win the other side through hate unless you're prepared to take it to full destruction. That is not a logical approach to life […] That's why, within the album, in my darkness and sorrow of the shit that I'm facing, of mortality and all that, the message that I'm leaving behind is a message of love."