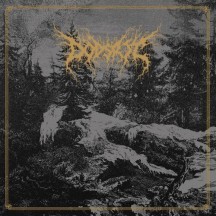 After the opener "The Third Door", I was slightly worried about the many contrasting styles on display here. Outbursts of howling screams behind an expansive wall of soaring folksy tremolo guitars grounded by crusty, testosterone-filled drumwork played black metal switcheroo with moody sections of martial tom-work and melodic, repetitive plucking, respectively. Halfways through the song, this moody plucking crescendo again died down into folky doom, then was topped off by a simple wall of power chords. "What the hell are Dödsrit (Death Rite) trying to do here?" I asked myself. As the album progressed into what I found to be increasingly more convincing songs, I stopped asking, and started enjoying it. Best not question a very good thing, after all.

Mortal Coil is the third album by multi-instrumentalist Christoffer Öster's previously one-man project, now expanded into a quartet. While I haven't heard his former output, I can't imagine this was a bad choice. When writing music by yourself, there's always a big risk of falling victim to either a lack of varied inspiration, or on the other hand, a lack of focus due to variation. "The Third Door" still sounds unfocused to me in that sense, but I assume it is intended as an introduction to the individual influences of the new band members, because Dödsrit's sound only gels better the more I listen.

Chances are this will be the case for you as well; Mortal Coil at first came off like too many things were being tried at once, but as closer "Apathetic Tongues" rolled by, I found Dödsrit a confident band with just enough character of their own to be taken very seriously. There is nothing particularly noteworthy about their influences: the most intense sections of the album are carried by Agalloch arpeggios and skillful drumming with an Impaled Nazarene punk flair, midpaced sections are often driven by Bathory power chord assaults, and the many atmospheric moments are founded on mesmerising, rhythmic hooks with a sort of Amenra-like quality.

Most of the time, Mortal Coil manages to be a surprisingly fresh take on melodic black, injected with just enough moody dynamics and hardcore attitude to keep it interesting, and hint at a promising future for the band.