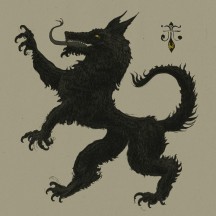 
Wormwitch, no, not Wormwood. Those are the Canadian master blenders of black, doom, punk, and anything that seems to fit in who also brought you the excellent and fun Heaven That Dwells Within. Now the quatuor from Vancouver is conjuring the black moon magick and the wolven spirits to bring forth their third kick ass offering entitled Wolf Hex. If you like your black metal mixed with crust punk, you have arrived.

Like their previous albums, Wolf Hex is a quick listen. A sonic blitz that runs around 33 minutes and dishes out direct songs that freshen up that whole black metal sound. It is black metal with heavy metal guitar solos, rock'n'roll attitude and emotional screams. The intense trio of "Canadian Denim Mountain Attack", "The Wolves Of Ossory" and "Hammer Of The Underworld" brings the punk'n'roll elements of their BM to the front while the acoustic guitar and chants on "The Crimson Proof" turns up the folk level tenfold before being hit by the relentless crush of melodic blackness that is "Abracadabra". "Leering Crystal Effigies" and "Teeth Of The Dawn" each bring back the blackish punk attitude forth in their own separate ways. Then the cover of Metallica's "Hit The Lights" is a groovy finisher, and it does align rather well with the overall tone of the album. Also kudos are in order as that iconic guitar solo in it was nailed with iron claws.

So to resume: Seven original songs, two short mood-setting instrumental pieces and an inspired cover. All the tracks rock but Wolf Hex is perhaps missing one epic song to coalesce the whole evil wolf concept into a definite killer album. Still, this is the kind of record that works best through quick replays, so there is that to consider.

Inspired by greats such as Uada and Suffocation, Wormwitch managed to distill the equivalent of one unholy Canadian rye into a blend of enjoyable anthems. That extra touch of rebellion that one can feel through their music only enhances the sonic experience that is Wolf Hex. There is something in there that tells you to go screw yourself graciously and I like the freshness of that. If you like your black metal infused with crust punk and attitude, you have most definitely arrived.

Written on 27.08.2021 by
Dream Taster
Bringing you reviews of quality music and interesting questions such as: