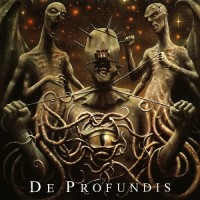 
De Profundis is considered a classic by a large portion of death metal fans, and is undoubtedly a crowning jewel amongst the rest of the Vader discogrophy, although it's open to debate to whether this album is truly their best, with the other major contender being the album Litany.

Vader are one of the biggest names in death metal and have been around for longer than most, and they have a fairly large discogrophy, but their second release, De Profundis, is the one album that stands out. It begins in brutal fashion with the opening song, "Silent Empire", which is my favourite song on the album, with the other standout tracks being "Blood Of Kingu" and "Reborn In Flames". The rest range from decent to mediocre, but nothing here that I would necessarily consider filler.

The thing that struck me most was the album's production; the drumming sounded flat and at times sounded like tin cans, which did annoy me slightly. However, over time, I have learned to appreciate the production more, as it shows more of the authentic approach to death metal, which you don't tend to hear much of in modern death metal nowadays, as the production is usually of a higher level quality these days.

The riffs are very technical, but do contain a large degree of melody to them, and, along with the drumming style, are very much thrash-influenced, and played at such a ferocious pace, much in the same manner as Reign In Blood by Slayer. The ferocious pace is relentlessly played throughout the entire album, and it just doesn't mellow out at any point. The wailing guitar solos are also a key part to the album, all making this a groundbreaking album for extreme metal fans back in the day. The vocals are an aquired taste, though; from my first listen, they didn't seem to be as harsh as I expected, but despite this, they still had a level of brutality that fit in very well with the style of music, reminding me of a much more brutal version of Sepultura or even Pantera to some extent.

De Profundis by today's standards is a very good and solid release that certainly lives up to it's ferocious reputation, but on the grand scale of things, I have to consider this to be a death metal classic, but maybe not in as high regards as classics such as Altars Of Madness, Cause Of Death or Left Hand Path. De Profoundis just doesn't have the same level of songwriting quality for me compared with those classics, but because of its sheer ferocity and relentless tempo, it is a classic in its own right.

I would recommend De Profoundis to those who prefer a more thrash-influenced death metal approach, with lightning speed, melodic riffs and insane drumming, rather than the in-your-face sheer brutality of old school death metal. For fans of Slayer that are looking for something even heavier, this might interest you, and be sure to make De Profundis a priority, if you're thinking of delving into Vader's discogrophy.