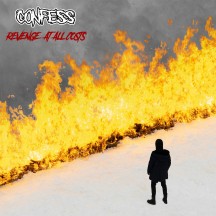 
Loads of metalheads talk big about how metal isn't dangerous anymore. Well, not "here". There's still places in the world where metal is actual resistance. And regardless of how much we glorify and romanticize that, I wish we lived in a world where Confess didn't have to make Revenge At All Costs in exile.

Confess' story kinda precedes their name and their music. You might've already heard the "Iranian band sentenced to lashing" story, even if you don't actually remember what band is it about, how they sound like, or what happened since. And it's that story first and foremost that was my main motivation when I interviewed Nikan Khosravi, the band's mainman, even if we didn't only talk about the band's experience with the authorities. There's surprisingly a lot of metal coming from Iran, at least compared to it's neighbors, so even by Iran's standards, Confess' story is incredible, or at least it was, until it happened again. Relocated to Norway and revived in order to keep making music, Confess now come out with their first album since the events took place.

If you're gonna hear a word used a lot when talking about the album, it is "story". Revenge At A Cost is an album with a story. And in such exceptional cases, it's quite hard to really talk about the album while detaching from the fact. Is Revenge At All Costs worth listening to because it's done by a band in exile, or because of its own merits as a music album? Is it even worth making the detachment when so much of Revenge At All Costs comes directly as a result of the story. The album wouldn't have sounded nearly as close to this if the events didn't happen. For start, an album made in Norway has different production resourced than one done in Iran. And secondly, most of the album is directly themed in the band's struggles due to the events. The album's opener is basically a collage of different news stories intertwined with the band's old music to make it perfectly clear that we know what the album is about. It's not like they're the only groove thrash band to leave the Middle East, but if there's a band that is justified in making music this angry and rebellious, it's them.

But also, Revenge At All Costs is a pretty balling album. I have listened to Confess' previous albums, and for albums made in Iran, they sound pretty good, both in terms of how good the songs are and how the album sounds. Well obviously, the second album is better than the first, but Revenge At All Costs isn't a massively better album than 2015's In Pursuit Of Dreams simply because it's no longer made in Iran and they have extra reasons to be angry. Confess were already a great band. The fire was already burning, Revenge At All Costs is just reaping the fuel that was added on top. And for a groove thrash nu-ish album that sounds like a blend of Soulfly, Slipknot and The Haunted, one that has one of the best recent uses of the DJ sampling things you used to hear in turn-of-the-century nu metal, this goes hard.

It has the oomph, it has the riffs, the vocals sound like a mix of peak Corey Taylor and peak Max Cavalera, it has a fair share of variety in how in integrates atmospheric sections and nu metal tropes. Whenever the next Confess album drops, I hope I'll only have to mention their story in passing, as Revenge At All Costs would have proved their worth by then. And hopefully it will have a better cover art. One can only hope.

Written on 28.01.2022 by
RaduP
Doesn't matter that much to me if you agree with me, as long as you checked the album out.
More reviews by RaduP ››