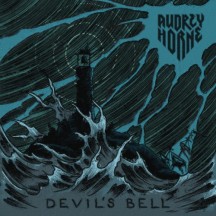 I remember the first time I heard Audrey Horne the better part of a decade ago, courtesy of a featured track on a sampler CD that came free with a magazine; I was hooked in instantly by the band’s throwback to classic rock with a modern bent, thanks to some excellent guitar work and due to the presence of one of the most underrated vocalists in rock, Torkjell "Toschie" Rød. Having kept tabs on them throughout the ensuing decade, the band’s output hasn’t hit the same heights they did at the start of the decade; while 2022’s Devil’s Bell does start to right the course and steer the band back to more bountiful waters, it isn’t the complete turnaround fans would hope for, though it is a good listen.

The band have long had all the tools and talent at their disposal, yet albums like Pure Heavy and prior release, Blackout, could never consistently bring these talents to bear to make the whole greater than the sum of its parts. Devil’s Bell does ultimately suffer from the same pitfalls, though they are able to raise their head above the parapet enough times to ensure this album is the strongest for a good while.

The journey from the start of a song to the end of it is enjoyable owing to the vocals and guitar work, but you will find yourself looking at a map wondering if there was a better means of travelling from start to end, because the route the band plot is listless and lacking much in terms of audio scenery. “Animal” and “Toxic Twins” are good examples of this, with the guitar riff and chorus of the former landmarking the track while the latter has good verses and builds well to a payoff that fizzes rather than explodes, with a slow section in the middle that kills all momentum before a NWOBHM-worshipping solo puts the track back on…well, track.

As hinted at before, the true MVP of Devil’s Bell is the guitar work/tone of Isdal and Tofthagen, who inject the songs with their memorable and quality moments, bringing a classic rock vibe to proceedings without being self-indulgent or merely regurgitating their obvious influences. “Danse Macabre” and “Break Out” are rich in Thin Lizzy-influenced guitar harmonic interplay. The album’s strongest track, “Return To Grave Valley” is effectively a showpiece for the guitar duo, spieling off riffs and solos that keep listeners hooked and engaged through the different twists and turns for the duration of the track while the otherwise overlooked bass work of Lien is given space to play some solid Steve Harris-esque pieces (the album finale “From Darkness” does a great job of combining a Maiden-esque approach with classic rock).

Rød’s vocals have for a long time been the strongest weapon in the band’s arsenal; while I think the guitar work pips him on Devil’s Bell, he makes a strong case on tracks like “Ashes To Ashes” and “Danse Macabre” that he remains the band’s center piece for a reason, walking that tightrope between melody, power and grit yet again.

Overall, Devil’s Bell is an album that has a lot going for it, but it never truly lives up to the hope and hype; while it is serviceable and enjoyable, you can’t help but feel the band could have done better with what they have. It is a notable improvement on the band’s recent form, but it isn’t the return to the band’s heyday of their self-titled.