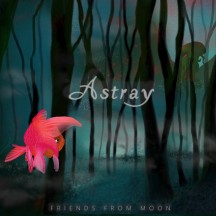 
I enjoyed the first album I reviewed from India so much that I decided to cover another right afterwards.

It is pertinent for me to mention that Aarlon album here, as Friends From Moon is the solo project of Aarlon guitarist Ritwik Shivam, albeit one that multiple of his bandmates have helped out with in guest appearances. Much like Dafan, Astray is the first release from this project, so it must’ve been a busy few months prior to this for Shivam to get these two records made. There are further parallels to draw, as both records feature 8 songs and run for almost the exact same amount of time, each clocking in at a very digestible 34-35 minutes. One final similarity between the two albums is that I’ve rather enjoyed listening to both of them.

One area in which the records diverge a bit is in how they sound; there was a progressive slant to Dafan, just as there is here, but it materializes in a different form. With fewer ties to metalcore or alternative metal, Astray instead wears its greatest influence quite nakedly; it is impossible to listen to this album and not think ‘Shivam must be a Devin Townsend fan’. The Canadian is a consistent reference point, whether in the general bright aura of the album, the vocal inflections, melodies and harmonies (just try “The Enemy” for size), or just the sense of quirky fun that raises its head from time to time. It’s not that Astray is a complete rip-off or anything, but it came through as the most obvious comparison right from the off, in both the softer cleans and more forceful vocals belting out over the stomping chorus of opener “Rage On”, and that’s before you get to the muscly Strapping Young Lad bridge.

Still, there are far worse artists to pay tribute to than Devin Townsend, and the spin on that sound that Shivam presents with Friends From Moon is very charming, with these compact (most sitting in the 4-minute region) songs flowing along very nicely through euphoric vistas, touching in quite a few different vibes. The guitar lick in “Rebellion Road” sounds like a modern prog interpretation of the iconic hook in AC/DC’s “Thunderstruck”, and the Shivam shows himself to be a very competent vocalist on this song, balancing gentler cleans with more full-bodied singing quite naturally. The vocals regularly are in charge of carrying the music, such as on the lush acoustic piece “Riverine”, and he carries that responsibility impressively well.

One thing that Townsend is known for is his quirkiness, and that is something that is brought over by Shivam to Astray. The danceable midsection and accompanying strange backing vocals of “The Enemy” gives one taste, while more off-kilter moments can be encountered in “Marvels Beyond Madness”, a song with a real Deconstruction energy in moments. This song is the longest on the album, and it makes the most of it; a multi-faceted beast that ranges from techy aggro and hefty djent slaps to triumphant marches and a great climactic vocal hook. This ambition comes through in the stylistic variety that can be heard on the album, as there is some musical experimentation heard on Astray. It doesn’t always work out; the one song that I don’t find myself caring for is “Come Together”, less because of the electronics, which work fine, but more its main vocal motif, which replicates the one used by The Beatles on their own song “Come Together”, as well as how some of the layers thrown into this song don’t quite click together. On the flip side, the title track explores ambience rather successfully, while “Of The Spirit” is a very respectable orchestral outro for the album.

I’d never heard of Ritwik Shivam until a month ago, but I’ve now heard two albums that he has performed on within the blink of an eye and thoroughly enjoyed both; there is room for Friends From Moon to grow beyond the Devin Townsend influences as time goes on, but he’s replicated that style in a really accomplished manner here. First Aarlon and now Friends From Moon have had very successful first full-length outings; I’m eager to hear what this group of musicians come out with next.

Written on 27.04.2022 by
musclassia
Hey chief let's talk why not
More reviews by musclassia ››