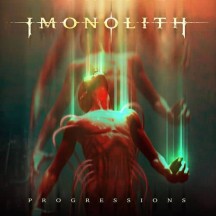 
As one astute commenter noted, it seems curious to give the name Progressions to an album that seems to reject the concept of progression.

Imonolith emerged from the ashes of the disbandment of the Devin Townsend Project, as Devin Townsend pressed forward on his lonesome once again. DTP alumni Brian Waddell and Ryan Van Poederooyen joined forces with Strapping Young Lad’s Jed Simon and Threat Signal vocalist Jon Howard to form Imonolith; however, considering the exuberant nature of Devin Townsend’s work, it was slightly baffling when this new band’s debut record, State Of Being, was closest stylistically to nu metal. It’s not like nu metal is a complete dead end musically these days; Vein.fm have started to make a real name for themselves with their nu metal/hardcore fusion, while Bloodywood made waves with their own take on the style. However, State Of Being did not fall into the same camp, and Progressions is even less of a success.

Progressions was initially planned as a 5-song EP, before being fleshed out into a full-length record. For what it’s worth, it would have probably been a good idea if it had stayed as an EP, as those 5 songs feature what are probably the best moments on the album. Now, that is stated in a relative manner, as songs such as “Angevil” and “The Lesson” take cues from several sounds that were heard in abundance in turn-of-the-millennium American metal (nu metal, alt-metal, metalcore) without offering anything either new or interesting. The guitar licks, vocals and choruses of these tracks are perhaps just about passable enough that someone with a hunger for that time period would find them satisfying, but the fact that both tracks exceed five minutes is hard to swallow.

Even more staggeringly long is the 7-minute “We’re In This Together”, which could have been a Faith No More song if that band had continued into the 2000s and lost all of their songwriting talent, as Howard, very much not playing to his strengths, turns into a poor man’s Mike Patton as he alternates between funky verses and belted-out choruses. The attempt at channeling Linkin Park on the mostly unplugged title track is similarly unsuccessful.

Still, as I’ve already said, these are some of the stronger parts of Progressions. In order to make this into a full album, Imonolith added three demo versions of songs that appeared on State Of Being, a remix of one of those tracks, “The Reign”, that features Meshuggah’s Jens Kidman on vocals, and a cover of Björk’s “Army Of Me”. Of these, “The Reign (Remix)” is certainly the most listenable; there are brief moments on this song where one can envisage how musicians involved with Devin Townsend (specifically Ziltoid) came up with this, with some quite gnarly chugs in the chorus. Overall, this is an adequate metalcore track; however, considering it’s one that had already been released, it’s hard to see why two versions of it were necessary on Progressions, particularly as the main change in the remix seems to be a simple keyboard layer in the chorus.

Beyond that, the “Army Of One” cover sounds worrying close to Disturbed, with the angst and aggression in the vocals really not living up to Björk’s legacy. Furthermore, the main purpose of the demos at the end of this album seem to be to make the new tracks look good in comparison, as the first 10 seconds of “Instinct (Demo Version)”, during which Howard replicates Corey Taylor’s tone at the beginning of Slipknot’s “Wait and Bleed” but in a much worse manner, would make almost anything sound great in comparison; the fact that this vocal ‘hook’ is brought back in the song’s chorus is even more baffling. Compared to “Instinct”, Imonolith have progressed with the new songs on Progressions, but considering that the bar to manage that is buried about 50 feet below the Earth’s surface, it would have been impressive if they hadn’t cleared it.

Anyone who’s followed my reviews for the site will have noticed by now that I generally write positive reviews; my own bandmates joke that I rate everything in the 7.5-8.0 range. It’s an inevitability; when you’re a volunteer reviewer writing purely out of personal interest with what free time one has, it’s hard to find the motivation to deliberately choose albums you dislike and replay them multiple times in order to review them, so most negative reviews end up being letdown records from bands you’re a long-time fan of. Still, I somewhat feel like if everything’s good, then nothing’s good, and it’s occasionally good to calibrate one’s scores and check whether all those positive reviews were justified. Thankfully, an album as bafflingly poor as Progressions is perfect for such an exercise; the aggravation that any one of these tracks induces really helps emphasize the quality of everything else. One really has to wonder whether the likes of Waddell and Van Poederooyen intend to stick with this project for the long haul; unless there’s a radical reinvention of Imonolith’s vision, it really does seem like a waste of their talents.

Written on 26.05.2022 by
musclassia
Hey chief let's talk why not
More reviews by musclassia ››