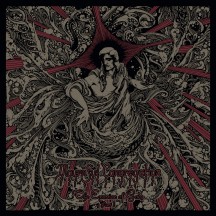 
01. Mountainous Shadows, Cast Through Time
02. The Exuviae Of Gods
03. An Epic Dream Of Desire


In some genres, a 20 minute album counts as a full-length, in other genres you can go well over 30 minutes and still have an EP.

Mournful Congregation are a band that for a pretty long time I kept mistaking for Mourning Beloveth. And who can blame me? Both two words, both start with 'M', both a more extreme and slow kind of doom metal, both formed in the early 90s, thus both veterans and pioneers, both came to prominence in the early 00s, both have vocalists whose names start with 'D', both amazing bands. And to really drive this point across I came this close to mentioning about the split they did with The Ruins Of Beverast a few years ago. But nope, that was Mourning Beloveth, who really gotta come out with a new album sometime. Or maybe these two bands should do a split. Regardless, here we have Mournful Congregation returning with their first release since their 2018 album, The Incubus Of Karma, an album we quite liked. Now, the band is splitting their new album, and giving us the first part as an EP.

I'm a bit conflicted on whether I'd prefer it if Mournful Congregation just went head on and released the entirety of The Exuviae Of Gods whenever it was ready, or whether I prefer the more bite-sized approach of splitting it up. I even checked the promo package to make sure there was only one more part coming up, because I certainly would've preferred splitting if the entirety of the album was three parts or more. On one hand, now I'll feel compelled to review the second part two whenever that comes out (late 2022 apparently) and then figuring out what to say about that that I haven't already said about this part one. Well, without a part two at the ready I can't draw any comparisons yet, but Part One is already some funeral doom goodness.

This EP is structured into three tracks, the first and last being long funeral doom epics in the vein that one would expect from Mournful Congregation, while the middle track is a pretty beautiful interlude that does have a few hints of Agalloch's approach to interludes on The Mantle, while still being pretty lengthy in itself. Out of the two longer tracks, the latter one, "An Epic Dream Of Desire" is actually a re-recording of the title track from the band's 1995 demo of the same name. As to why the band decided to re-record this particular track instead of just going all the way and re-recording the entirety of Weeping and An Epic Dream Of Desire is beyond me, I can attest that the version of the song from this EP definitely benefits from the renewed recording.

As far as the sound goes, the band definitely struck gold in self-describing their sound with the band name. I'm struggling to come up with a better adjective than "mournful", and there is a hint of the religious in the funeral doom sound that does hint at a "congregation". Though the elements it uses have since became staples of the funeral doom sound, the organ, the growls, the glacial tempos, the guitar melodies, the dreary spoken word, Mournful Congregation deliver a pretty rewarding serving of them. I guess it does say something about their skill and evolution that I prefer the two new tracks to their old track, even in its revitalized form. And because it's an EP, it achieves something that few funeral doom albums manage: not making me feel compelled to check how much longer until the album is over. I guess that's why my favorite Mournful Congregation song is from their only other EP, 2014's Concrescence Of The Sophia.

What Part Two will bring is up for future Radu to assess. But my money is on it being another rewarding albeit straight-forward serving of funeral doom metal.

Written on 01.06.2022 by
RaduP
Doesn't matter that much to me if you agree with me, as long as you checked the album out.
More reviews by RaduP ››