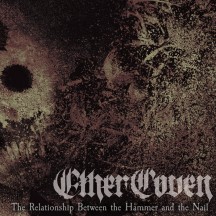 
Ether Coven are a band that are not afraid to make their message loud and clear, and when that message covers topics as ugly and painful as cancer and suffering, it’s unsurprising that the music accompanying that message is similarly ugly.

Once just Ether, the band now known as Ether Coven emerged in their current form in 2019. The new project’s debut release, Everything Is Temporary Except Suffering, was on my radar at the time of its release at the beginning of 2020, with the band exploring darkness and pain with murky atmospheres, bruising heaviness and some lengthy song runtimes. One hopes that even suffering can be temporary, as in the years since that record’s release, frontman Peter Kowalsky has been diagnosed with, and is still fighting an ongoing battle with, colon cancer. That battle has lurked over the entire creative process that has led to the release of Ether Coven’s new album, The Relationship Between The Hammer And The Nail, and the resulting emotions are laid bare for all to witness; yet, even in that darkness, one can perhaps detect glimpses of light.

Addressing Kowalsky’s disease head-on from the off, “Psalm Of Cancer” is a grim, venomous trudge of sludge, with sharp-edged riffs, nasty dissonance and fierce vocals. There’s bursts of blasts, slowed-down stomps and brief lulls packed into 5 minutes, and tracks such as “God Hates Flags” (on which Justin Gianoutsos gets to have a proper tom workout on the drums) and “Of Might & Failure” similarly channel this abrasive, bulldozing sludge venom; fans of bands such as Conjurer will find a lot to enjoy on these songs.

Still, the songs that stand out to me on The Relationship Between The Hammer And The Nail are those on which Ether Coven expand their horizons and spill over into post-metal territory. The two songs that exceed 10 minutes on the record, “Afraid & Suffering” and “The Warmth Of Your Bathwater”, still find room for vulgarity, but there are prolonged sections that explore quieter dynamics and cleaner tones. “Afraid & Suffering” changes track early on from its bruising beginnings and instead ventures into an extended build that brings in post-rock tremolos and patient progressions, and while there is a return to aggression later, the song climaxes with sorrowful melodies and clean-sung vocals to deliver a suitable gutpunch. “The Warmth Of Your Bathwater” spends even more time exploring similar ground, offering ample melancholy to contrast the misanthropy found in the bulk of the other songs.

One more song that further extends those emotions is “Temple Of Wu”. The Relationship Between The Hammer And The Nail features a litany of guest vocalists from the hardcore/metalcore scene, including Howard Jones (ex-Killswitch Engage), Dan Weyandt (Zao) and Dwid Hellion (Integrity), but “Temple Of Wu” is the exception; Wu Kowalsky, who the album is dedicated to in memoriam, is credited as featuring on it, but the few vocals I can hear are left low in the mix, instead allowing the dreamy, post-rock soundscapes of this song to shine and serve as a fitting testament to the dearly departed.

An album moulded by bleak lived experiences, The Relationship Between The Hammer And The Nail is a record that runs a gauntlet of potent emotions, delivered with utmost conviction. Lurking in the same dark realm between sludge and post-metal as Cavernlight’s similarly lengthily-titled As I Cast Ruin Upon The Lens That Reveals My Every Flaw, Ether Coven’s new record is one of the standout sludge records of 2022 thus far.

Written on 09.08.2022 by
musclassia
Hey chief let's talk why not
More reviews by musclassia ››