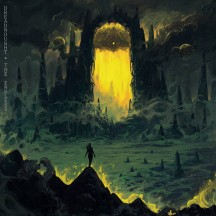 
Dreadnought ran out of elements to theme their albums around, but unsurprisingly they remain capable of writing ingenious, enchanting music, a talent of theirs that may, in fact, be endless.

The Endless thematically represents a new beginning for Colorado’s Dreadnought, described in the Bandcamp blurb as a character arc exploring the human divide of light and suffering. While the theme brings a new dawn, the album represents the end of a journey for Dreadnought in a different manner, one that involves human divide; this record is the last to feature the band’s original line-up. The quartet has become a five-piece, with keyboardist/vocalist Lauren Vieira departing to undertake new endeavors; Vieira is replaced by Glass Human’s Emily Shreve, while former Green Druid drummer Ryan Sims has joined as the band’s second guitarist, in anticipation of the challenges of performing this record’s material in a live setting with only one guitar. Therefore, The Endless is arguably the most transitional record of Dreadnought’s journey thus far, yet the band remain unmistakable from a musical perspective on this album.

For the uninitiated, Dreadnought’s style can loosely be described as a kind of ethereal prog, where siren-esque singing, mellow keyboards, shimmering guitars and slick drumming form a lush sea of tranquillity that is routinely disturbed by blackened intensity, shrieking vocals howling over somewhat cacophonous arrangements. The vocals, performed for one last time by the tandem of Vieira and guitarist Kelly Schilling, involve both clean-sung duetting and overlap and contrasting harsher sounds. This last outing makes it clear that Shreve has big shoes to fill, as the synergistic relationship between the two vocalists is highlighted on tracks such as “Worlds Break” and “Liminal Veil”.

The balance has shifted a bit this time, though; while the extreme and softer sections felt somewhat equivalent in prominence on Emergence and A Wake In Sacred Waves, on The Endless, the gentler side of Dreadnought feels prioritized. There are moments of intensity to be encountered for sure, with “Worlds Break” twice building up to high-octane climaxes, while “Gears Of Violent Endurance” opting for violence early on. It remains just as dynamic a record as past endeavours, yet songs such as the title track and “The Paradigm Mirror” largely revel in the quiet and mysterious, treating its loud parts as brief blasts punctuating the surrounding stillness.

By now, the Dreadnought formula is pretty well established, and isn’t necessarily changing much on an album-by-album basis. To begin with, I found myself slightly underwhelmed with The Endless; the band’s style is something that I highly appreciate, but I’m not enamoured enough to want to gorge on it forever. However, I found this to be a record that really rewarded repeat listens; there’s a lack of immediacy, so it’s not one to grip you instantly and pin your attention down, but its insidious nature casts a spell with prolonged exposure. For me, one track that really benefited from this was “Midnight Moon”, whose In The Absence Of Truth-era Isis-style opening instrumentation initially impresses, but which really makes its mark with the increasing heaviness that builds as it progresses and explores lower registers. Another slowly revealed highlight is “Liminal Veil”, the album’s longest song, and one that has a persistent malevolent undercurrent that reminds me a bit of the Oranssi Pazuzu school of bands.

There remains a lack of ‘true love’ moments in their music that prevents me from becoming a full-fledged Dreadnought fan, but they operate in entirely their own sphere of music, and they continue to render that unique style in a way that compels, and increasingly so with continued exposure. The band’s next challenge will be to carry this impressive consistency into their new post-Vieira era.

Written on 02.09.2022 by
musclassia
Hey chief let's talk why not
More reviews by musclassia ››