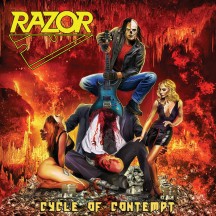 Canadian thrash may not get the same coverage and adulation as their brothers in arms do south of the border, but it's not for lack of quality, owing to the presence of such bands as Exciter and the, ahem, Razor-sharp band of the same name.

Returning to the studio for their first album in twenty-five years(?!), Razor re-emerge into a thrash scene vastly different from the one that their last album Decibels was unleashed into. Cycle Of Contempt is the sound of a band taking the towel that some of their brethren had long thrown in and slinging it over their shoulders for later use after they've laid waste to the audience before them.

The band's trademark foot-to-the-floor punk-infused style has not lost its allure in the intervening years; "Off My Meds" and "Bitter Pill" are the kinds of kick-ass track that Razor would fill their prior albums with to the delight of fans. "Setup" is the kind of pissed-off pump-up anthem anyone who feels spited needs to hear, and "Flames Of Hatred" looks to be a highlight of any upcoming show by the band.

Reid may have only appeared on one of the band's classics works (as well as the underrated Open Hostility), but he fits the band's style like a hand in an iron fist. While the years may have toughened his voice, it still suits the band's style, even if it's limited in its delivery. Carlo and Campagnolo remain from the band's early days, with both ensuring that Razor retain their classic sound. Campagnolo's subtle but powerful fretwork ensures each track has a powerful rhythm behind it a la "First Rate Hate", while Carlo runs rampant across the entire album.

Though Cycle Of Contempt has plenty of highlights, there are moments that will make you question their quality. "Crossed" has a weird vocal style to it that does detract from the solid musicianship on show, while "All Fist Fighting" has similar issues with its chorus, sounding more odd than gung ho. Perhaps the most egregious of all, though, is the album cover; with the band sticking to their guns musically, it seems odd they want to fit in with the modern scene artistically.

While the album is enjoyable as a glory ride for fans of Razor, it does little more than that as a going concern for the band. Still, even if little more than an advert for listeners to delve deeper into their discography if they are yet to do so (in which case, Evil Invaders and Violent Restitution should be your first ports of call - you can thank me later), then Razor do more than enough to tempt you in. However, Cycle Of Contempt isn't the complete article itself.

Written on 21.09.2022 by
omne metallum
Just because I don't care doesn't mean I'm not listening.
More reviews by omne metallum ››