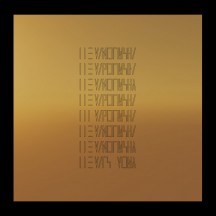 The Mars Volta is one of the bands I didn't really expect to come back. They had such a trailblazing run in the 2000s, and even if their last two records from that run are love-or-hate in their fanbase, they still had some of that passionate and explosive energy that made The Mars Volta such a force to be reckoned with. So something about that ten years run from 2002's Tremulant to 2012's Noctourniquet felt complete. Omar and Cedric kept themselves busy since, even reviving their pre-The Mars Volta, At The Drive-In, for 2017's in•ter a•li•a, which was a pretty good record by the way, as well as starting new projects. So I don't really understand the need for the revival of The Mars Volta. And I especially don't get naming the reunion album as a self-titled if it's the most uncharacteristically The Mars Volta-ish album.

To get it out of the way: this is a pretty major sound departure. This is an art pop record. The Mars Volta's place on this website was already questionable (and if you ask me At The Drive-In are closer to metal), so such a move takes them even further. Thus, there's two ways to look at this record: as a The Mars Volta record and as an art pop record. The title of the record indicates that the band would rather you take the first approach, which is pretty mind boggling to me, since that would be equivalent to shooting yourself in the foot. Generally, self-titled albums that are not debuts indicate large statements about who the band is. We know how much that can backfire.

So how does The Mars Volta work as a The Mars Volta record. Well, it is still somewhat recognizable, mostly due to Cedric's instantly recognizable vocals. And to be fair, art pop has always been present in The Mars Volta's music alongside the prog rock and the jazz fusion. So an album that intensely focuses on one of the aspects of their sound in favor of another isn't that unimaginable. But what this album proves is that The Mars Volta cannot make that style interesting for the entire duration of the record. And a lot of these songs would've worked quite fantastically if featured alongside songs of their usual style. And it's really not like the art pop part of their sound that was the most impressive in the first place. Building an audience based on explosive, frantic, surreal music and then releasing something that is this mellow and accessible is asking a bit too much open-mindedness. It's something that would've worked better if it was just another The Mars Volta record, one where we can see them indulging in a part of their sound. But no, it had to be the record, a self-titled reunion record.

But let's remove the context of the record for a second. Let's remove the weight of expectations, even if quite a lot of them are imposed by the band rather than self-imposed. How does The Mars Volta work as an art pop record. Well, for one, I don't think Cedric's vocals work for this style in the long run. He can certainly hold his own, and art pop is full of very idiosyncratic vocalists, but he's not someone I'd immediately reach for for mellow music. The album also has some of that characteristic intricacy that is worthy of the "art" side of "art pop", and it does keep just a bit of the prog rock and jazz fusion of previous records, though I fear it's more projecting than actual content, instead replaced by stull like neo-psychedelia. So there's definitely enough here to make it at least a bit worthwhile, and some of these songs can prove to be growers. But it's still not enough to really be convincing. The production doesn't have the lushness that would be required by these mellow and eclectic sounds, and while the sound palette is quite interesting, the songwriting feels a bit directionless, like the songs aren't really building up to anything instead of just ending eventually. And no track is as guilty as "Qué Dios Te Maldiga Mí Corazón", a latin rock track where it finally feels like things are getting interesting, only to be blue balled by the track's length of less than two minutes. Though one thing is for sure, looking at the record without its The Mars Volta context is the only way I could get any enjoyment from it.

Overall, The Mars Volta is not a disaster, does have its fair share of interesting moments, but fails to live up to any kind of expectations, whether as a record of its chosen styles, and especially not as the much anticipated The Mars Volta comeback.