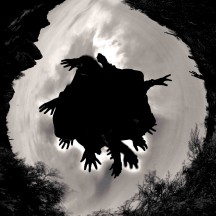 
I admit that Kryatjurr Of Desert Ahd's desertification desolation hit different when the first two EP's were released in June and July's heatwave, but object permanence in regards to climate change is something that's up the band's sleeve.

Atmospheric black metal is something that's most often associated with colder climates. The mountains and fjords of Norway. The pine forests of Cascadia. Mighty Blashyrkh and all that. But there's also been a steady output of "warmer" black metal lately, from the spaghetti western of Untamed Land, the wild frontier of Wayfarer, the tropical forests of Vallendusk and Kaatayra, and the fields of flowers of Fluisteraars. Sure, it's not entirely a new phenomenon, since black metal bands have been sprouting in all parts of the globe for a long time, but none have been able to make the heat feel as malevolent as Australia's Kryatjurr Of Desert Ahd.

Kryatjurr Of Desert Ahd are quite a mysterious band, a trio of anonymous members, who I've stumbled upon because someone stumbled upon Markov Soroka (Drown & Tchornobog)'s recommendation and wrote about it. Another similarly desolate EP later and now we finally have a debut full length. And I say "finally", but that's quite the record for how shortly it was between the band's debut EP in June, the second in July, and the full length now in October. And with Markov finally contributing with vocals on a track alongside his usual mixing/mastering work, this does feel like the band stepping up for something more complete.

The sounds is something that's often closer to raw black metal, with its incredibly lo-fi tones, heating black metal past its melting point into an ooze of riffs, blast beats, and shrieks. The band does mix up the usual black metal atmosphere with a bunch of sound effects, especially in the interludes, only enhancing the hypnotic lo-fi quality. At this point, it's not really the temperature that is the atmosphere's main selling point, since I can totally see someone listening to this without any context and not associating the atmosphere with any temperature, but with desolation. If anything, it's the nausea of a heatwave rather than the heat itself. It's the despair of lands turning uninhabitable. Of oceans boiling. Of cement scorching. Of rivers drying. It's psychedelic in the most malevolent and desolate of ways.

And we arrive back at the point where some of raw black metal's most interesting qualities is its sound sculpturing. I can call it lo-fi, but it feels purposefully and meticulously crafted for the most nauseating effect. The melodies, great as they are, become even more disorienting within the mix. The shrieks even more distant and abhorrent. What lies underneath could've made for a record that would be even quite groovy at times, but it's the sound of it that really does wonders.