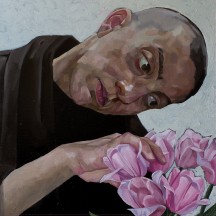 
Birds In Row keep pushing the "post-" in "post-hardcore" further.

Out of the most recent post-hardcore bands that seemed to have gained a bit of a metal audience, Birds In Row are one of the first bands to come to mind. Though their career is now over a decades long, so they're by no means a new band anymore, their discography is still pretty sparse. Three EPs and one split aside, there's only two other Birds In Row albums, and Gris Klein arrives four years after 2018's excellent We Already Lost The World. Though not completely consistently so, their sound since their first EP, which felt the closest they were to pure hardcore, they gradually increased the "post-" aspect of their hardcore sound.

Like I said in my City Of Caterpillar review, nuances in this area of hardcore often have blurred lines. You could also call Birds In Row a screamo band, and you wouldn't be wrong, since they have a lot in common sound-wise with the aforementioned City Of Caterpillar, which were already a very post-rock inspired band. And just like the latest City Of Caterpillar, the latest Birds In Row finds them at their most mellow, melodic and accessible, at least by post-hardcore standards. Be aware that this still includes plenty of screams and intense instrumentation, but the album flows more smoothly through more atmospheric and melodic moments, with indie rock inspired clean vocals and strumming finding organic ways to be integrated within the punkish sound.

It does make some sense that this is their first release for Red Creek, the label recently started by Cult Of Luna, since Gris Klein makes Birds In Row have a lot more in common with Cult Of Luna's sound. But this is still first and foremost a post-hardcore record. The bass, instantly distinguishable and punchy, keeps being a highlight in the instrumentation. "Cathedrals" might have the best post-hardcore riff of the year. The drums are explosive. The vocals are half of what makes this have such a strong emotional appeal. And amazing performances aside, this is the kind of album that would get a bit stale due to its intensity for longer runtimes, so the 42 cutaway point maximizes its impact.

There's a bit of a different kind of energy on Gris Klein, both in terms of intensity and emotional. Even without taking the more mellow yet equally intricate sound, there's something in the demeanor that changed towards a more somber act of moving on.