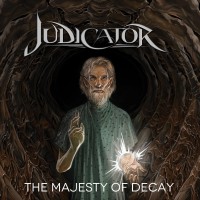 
The Majesty Of Decay is Judicator's sixth release, and I have to say, judging by the quality of this release, there is no clear indication that this band will be letting their feet off the power pedestal anytime soon. Over the last decade, Judicator have proven to be a modern day force (by U.S. power metal standards at least), doing so by keeping their very genre's traditions alive and well, whilst incorporating their own style and image to satisfy the needs of U.S. power-crazy fans.

Judicator may be a U.S. power metal band by the way of nationality, but their original influences aren't exactly that straightforward. European powerhouse Blind Guardian is believed to have been the band's first major influence, which is made evidently clear from the sound of their early records right through to this very release. The majority of lyrics are set around similar fantasy themes to that of Blind Guardian, and along with the epic song structures and melodies, that have contained a hint of Helloween throughout their discography. It's clear that Judicator's intentions are heavily leaning towards the style and influence of 80's European power metal, maybe even more so than traditional U.S. power metal.

Now hopefully you have a gist of what this band is about, but how does The Majesty Of Decay fare with the rest of Judicator's discography? Well, it continues the progress from Judicator's previous work to some degree, although the album does take a bit to get going, I have to admit. The first two tracks don't exactly go at a pulsating tempo, with the slow opening acoustic passage on the first track being particularly noticeable, and despite some decent guitar work on these first two songs, there's not much to really write home about. However, once you hit the third track, "From The Belly Of The Whale'', you will notice things start to go a little more interestingly; not only does the album increase in tempo at that point, there is also a notable element of thrash too, with the grooves and rhythm seemingly giving off a Megadeth sort of vibe. The next track, "Daughter Of Swords'' follows suit, with its heavy catchy riffs from the start, and memorable catchy chorus.

From there, each track keeps up the momentum, with memorable choruses from the clean harmonised vocals. The guitarwork in general is pretty decent, especially the solos; the riffs, however, aren't particularly that memorable, and lack aggression at certain times. However, the album finishes with what is in no doubt its standout song, "Metamorphosis"; a track with a running time just shy of ten minutes, this contains some classic instrumentation, including a very impressive guitar solo, and a fantastic saxophone solo too.

Although there's quite a lot going on, the layering between the instrumentation and symphonics works very well; there's a much more clean and refined approach in the production, which allows all of these elements to work well together, but unfortunately this sacrifices the meatier, heavier, and more aggressive tone in the process.

Now coming from me, if you want to hear some quality standard modern-day power metal, perhaps an album that equally contains elements from both the U.S. and European power metal without coming across as ridiculously over-the-top cheesy, then The Majesty Of Decay may well be this year's perfect choice for you. Maybe this is not their best release, but it's an enjoyable one at least.