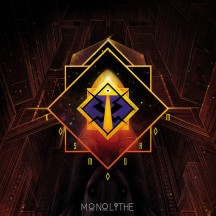 
It’s unfortunate that Monolithe have become lodged in my head as ‘the band that does weird stuff with their song lengths’. Admittedly, the extent to which they have placed patterns in their track lengths on each album does mean that they have no one else but themselves to blame for that, but nevertheless, the consistent quality of their music across records, including this one, does make anything that draws attention away from said music an unnecessary distraction.

Once upon a time, Monolithe were a band that released album-spanning epic funeral doom songs (some interesting droning tangents notwithstanding), with each of their first four records comprised of a single song that smashed the 50-minute barrier. The funeral doom tag is one that Monolithe continue to carry with them, but that’s not really representative of their journey in the latter half of the 2010s, as the songs got increasingly shorter and the music more approachable. By this point, the melancholic yet ominous doom they’ve been recently espousing is closer to something akin to the earlier Swallow The Sun records. Full-length album number 9, Kosmodrom, broadly continues in this vein, but there are flashes to their former endeavors that can be encountered here.

The two previous records, Nebula Septem and Okta Khora, saw their places within the Monolithe discography represented both nominally (Septem, Okta) and in the aforementioned song lengths (Nebula Septem contained seven 7-minute songs, Okta Khora contained 8 songs, with each song lasting for either 4 or 8 minutes and 4 or 8 seconds). Perhaps the 3-year break between Okta Khora and Kosmodrom, the longest interval between releases for a decade, has convinced Monolithe to take a different approach for their ninth record, as there’s no central place for the number 9 this time around (the track lengths are still eye-drawing though, with a tracklist running for 10:00 - 10:30 - 10:30 - 10:00 - 26:00).

Conceptually, this album takes inspiration from the space race, particularly from a Soviet perspective (if “Sputnik-1” wasn’t a clear enough hint of this, then the title of track 3, “Ludryavka”, was an earlier name for the dog Laika, who the Soviets turned into the first animal to orbit the earth). It’s a bold political climate into which to release an album that looks at things from a Russian perspective, but Monolithe state that the Soviet space program is used as a backdrop with which to explore the idea of pioneering and the costs that come with the pursuit to be the first to accomplish a feat.

Musically, the album as a whole represents a continuation of the simultaneously melancholic yet subtly intense doom that produced good results on the band’s last few records. In some ways, there are hints at further lightening of the music in comparison to previous outings; “Sputnik-1” features clean-sung female vocals (performed by London Lawhon) in a fairly central role amidst the moody guitar leads and chunky doom instrumental base, and the overt melodicism of both the vocals and guitars brings poignancy to pivotal moments of the song. “Voskhod” is another song that finds itself fluctuating between sad melancholic melody and more sinister tones, with the former arguably winning out, while “Kudryavka” arguably goes a step further in embracing cleaner tones; this track features multiple guitar solos, the last of which (performed by album producer and Atoma/Enshine/Slumber figurehead Jari Lindholm) has a real Pink Floydiness to it.

At the same time, there is still plenty of darkness to be encountered here, and the closing "Kosmonavt", clocking in at a whopping 26 minutes, does flirt with rendering that darkness in ways that lean back towards their earlier material. The trudging crawl of the first third of this song utilizes the tempo, bleak growls, and menacing guitars/keyboards that made funeral doom Monolithe radiate such an edge-of-your-seat sinister darkness. After several minutes, the track shifts focus to quieter, more contemplative territory, but there are further subsequent dabblings with this ominous doom before its closing minutes, which are rounded off by a metal rendition of the Russian folk song “Katyusha”.

Those that have followed the Monolithe journey up to this point should be amply satisfied by Kosmodrom; picking up where the group left off pre-pandemic while also featuring glimpses back to their past, the record also incorporates a few new ideas for the group that settle in comfortably alongside the pre-existing Monolithe building blocks.

Written on 04.12.2022 by
musclassia
Hey chief let's talk why not
More reviews by musclassia ››