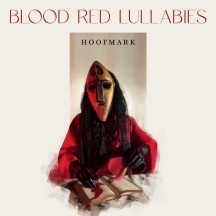 Whenever we encounter some sort of genre fusion, you often end up with one metal genre and one outside genre, and you expect the proportions to be similar, or at least considering that we're talking about it on a metal website, to have the metal in favor. Last year's Evil Blues was already a bit elusive, with the blues in the name not always feeling like the non-metal genre in the blend, with country seemingly taking a bigger role. It was also really psychedelic and had a big grunge feeling to it. But, for the most part you could say it was a black metal record with a lot of these influences. Blood Red Lullabies tips the scales even further.

Black metal is still a big presence here, but it's not until the fifth minute that you even get to hear any black metal. Even then, when that Negative Plane-ish section is over, you won't find that many unquestionably black metal sections in the rest of the thing. Harsh vocals are far in between, with the heavier sections more often accompanied by clean grungish vocals that remind me more of Dinosaur Jr.'s J Mascis than anything metal. Even those heavier sections can often feel departed from black metal and closer to some jammy sludge stoner. And if it was just that, it would still be a pretty straight-forward album, but straight-forward Hoofmark is not.

More than "evil" or anything like it, Hoofmark is psychedelic in a way that takes from various sources. It is folkish in a weird way, accentuated by the instrumental and often percussive breaks in the album, but the way the psychedelia is approached here feels strangely communal and spiritual. Some sections feel inspired by 60s psychedelic folk rather than merely country, while others take the grunge alt-rock towards some neo-psychedelic and noise-rock-without-too-much-noise directions, remind me of the aforementioned Dinosaur Jr. or Sonic Youth. At the same time, the blues still retains a presence, but mostly in the increased use of piano. For what originally was the work of a one-man band, Blood Red Lullabies feels a lot more like a band effort, albeit a much more spontaneous one.

This album managed to capture a spirit of psychedelia that I've encountered again and again when deep diving into older music that is often approached differently by stoner rock/metal, and I'm glad that it could be recaptured by Hoofmark here. In more ways than one, this album is fire.

Written on 09.12.2022 by
RaduP
Doesn't matter that much to me if you agree with me, as long as you checked the album out.
More reviews by RaduP ››