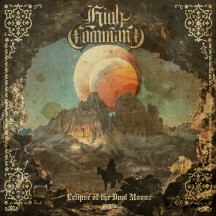 
There is a certain adrenaline rush when the tags ‘crossover’, ‘hardcore’, and ‘thrash metal’ are mentioned in the same sentence. High Command introduced a near perfect mix of these styles with their debut LP, Beyond The Wall Of Desolation, and they are now adding to that sound with Eclipse Of The Dual Moons.

Not that this latest one is so much different from its predecessor; it is more like a continuation, I’d say. If you look closely at the stunning cover art, the knight on the horse is the same one who posed on the debut, antlers and all. High Command make concept records about the world of Secartha; the lyrics, written and sung by Kevin Fitzgerald’s demented blackened thrash voice, belong to the fantasy world of graphic novels, which is something quite unusual for this music. It is great to be bludgeoned by the album’s sledgehammer-like riffs and colossal breakdowns, but it is also a fairly unique experience because it takes place in an immersive lyrical setting.

Musically, every riff is a wielding flail going straight for your skull. The album has vigour and volume, but it is not going for speed. There are fast sections, of course, but High Command aim for impact, and they build their songs around that. They are on the same label (Southern Lord) as Power Trip, and there are many similarities between the two bands. High Command mention influences that include Bay Area thrash (duh), Mercyful Fate and first-wave black metal, as well as Discharge and Cro-Mags. They even claim they were inspired by Ennio Morricone for the more epic, grandiose passages, and chord progressions. They are not lying; it’s all there.

I decided to review Eclipse Of The Dual Moons after listening to the first few seconds of the opening title track because any band that opens a record with a blistering solo has my attention. And this one keeps my undivided attention throughout, every time I listen to it. Despite my adoration of the closing track, “Spires Of Secartha”, which is an epic crossover thrash piece (try to visualize a guy wearing skinny jeans, hi-top sport shoes, a bandana, and holding a battle axe), my fixation on the "Imposing Hammers Of Cold Sorcery", whose twisted guitar sound, tempo, and general feel loosely reminds me of Slayer’s South Of Heaven, and my admiration for the surprisingly fitting inclusion of the Hammond organ on "Fortified By Bloodshed", I do not really want to recommend individual songs. The whole album is chock-full of monstrous riffs, killer groove, and a whole lot of fun. It sounds totally badass and, at this point of the year, it is my favourite thrash metal album of 2022.

If you appreciate a good story while you headbang, this is top class. And it would still be top class, even without the story.

“Forged from the souls of those that died,
Summoned from death to kill again…”