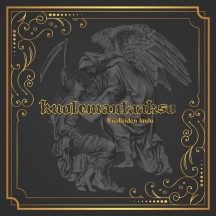 
Gothic death-doomsters Kuolemanlaakso released one of the finest albums of the year with Kuusumu, and here comes an EP showing a bit of a different side to the band. Let’s explore the gothic side of death valley, shall we? Kuolleiden Laulu (Song Of The Dead) is short even by EP standards, and contains songs that Kuolemanlaakso (Death Valley) deemed less fitting for the Kuusumu (Moon Fog) tracklist. Kuusumu always had gothic overtones, but more as a spice to the death-doom underpinnings than a defining feature of its music. Kuolleiden Laulu turns this on its head, and provides three songs of gothic doom with barely any death metal in it.

Mikko Kotamäki (Swallow The Sun) is one of the voices perfectly suited for this kind of music, just like he was on Kuusumu. The title track kicks the EP off with a melodic, gothic guitar melody, and the drums soon introduce a danceable post-punk swagger as Mikko’s baritone cleans in Finnish continue the story of the LP, singing about how they wandered in the darkness through a frosty, ashen land. Very soon, Lotta Rautiainen (Luna Kills) joins in for a chorus that is as uplifting as its lyrics are depressing. There is goth, but no death or doom on this one, so even if “Katkeruuden Malja” (The Cup Of Bitterness) from Kuusumu is a pretty close point of comparison, it is easy to see how the band felt this track might not fit onto the LP - there is only clean vocals, and “Juuret Jalkojen Alla” (Roots Underfoot) continues the trend, albeit introducing growls in its chorus. It is a doomier song, but still quite lite compared to Kuusumu.

My favourite song out of these just 12 minutes is the closing track, “Rautasiivet” (Iron Wings), which is also the song that is most similar to the LP (and maybe that’s why I like it the most). It sounds a bit too much like Swallow The Sun for my liking (I mentioned in my review of the LP that I vastly prefer the rocking style of Kuolemanlaakso to Mikko’s main project) but has a very soothing yet depressive picked guitar and the subtle chords of Aleksi Munter properly grounds the verse in a state of mourning and longing. The chorus is a big contender for sing-alongs on sad days, provided you know Finnish (it’s not as hard to learn as they say, it’s a very logical language without exceptions to its rules) and in the closing sections, the double-kick drum kicks the intensity up a notch as a weeping guitar solo tops the album off.

Judging from my descriptions, you might think I liked this a lot, but this is quite far from what I expected to hear from Kuolemanlaakso, to be honest. Expectations aside, this is still pretty unoriginal gothic doom, with not a lot speaking for it. The style on Kuolleiden Laulu does make sense from a certain perspective: it is an exploration of the gothic side of the band, but this is not really the side of the band I would have wished they would delve deeper into. I was stunned by the combination of styles on the LP; not because it had not been done before but because the introspective gothic moods and addictive melancholy juxtaposed with the absolutely gargantuan doom riffs and bellowing growls came together in just the right way, and in spectacular fashion. “Kuolleiden Laulu” is a good gothic metal song, and “Rautasiivet” has a very memorable melody, and the lyrics again paint vivid pictures of an utterly alien life under a real-world historic age of apocalypse, but I cannot help but feel that this is a collection of B-sides as well as another side of the band. Kuolleiden Laulu is a decent enough but unnecessary EP, and I hope this is not the path Kuolemanlaakso will be exploring in the future.