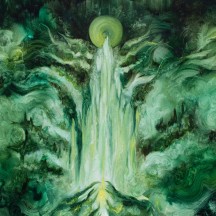 
I just know that there will be a lot more Esoctrilihum albums this year, but this time it started really early.

Not only did I just write a review of a surprise release of a one-man black metal band in which I talk about early year releases in this wild west period in which I counted some of the other options for this year, and then: BOOM! Another surprise release of a one-man black metal band. Far from the first time I was surprised about the emergence of an Esoctrilihum record, but I guess that says more about me being bad at keeping up with album announcements than about their release schedule. However, there's a lot that I can say about their release schedule, and at this point a lot of the talk around it eclipses the actual music. It's pretty difficult to talk about each album in a vacuum without taking into account just how much music Esoctrilihum makes.

At this point, Esoctrilihum is the definition of too much of a good thing. All of the reviews we've done of their music so far have mentioned that the project is very prolific, having released X albums in less-than-X amount of years, but how the quality of the records makes it worthwhile. All still true, but at the same time, these albums are long as hell, with the ones under 50 minutes of runtime being the exception to the rule. For example, Funeral here is 77 minutes long. It is the longest Esoctrilihum album. I've been making the case for long albums that use their runtime to create a feeling of rite-of-passage grandeur. But if you come out with rite-of-passage grandeurs every year, eventually that grandeur wears off. And this is the point where I'm not sure if it's just the diminishing returns that keeps souring the thought of new Esoctrilihum material for me. Did the vocals always sound this corny?

As much as Consecration Of The Spiritüs Flesh hasn't grown on me like other of the band's albums, I could at least appreciate its more aggressive direction. So having another album that feels closer to the symphonic grandeur of the Esoctrilihum albums that I liked is a bit more appealing, even with the prolonged runtime. Without comparing it to previous albums too much, I can say that cheesy synths and dynamic riffing is the name of the game here. I can hear more organs here than I remember hearing in any previous album, as well as plenty of clean vocals and strings. The interplay between all the elements is still what gets me after all this time, so there's clearly a lot of thought and care that went into making this. But I've heard it before.

I'm not sure if I'll ever be compelled to cover an Esoctrilihum album again. Even with a lot of my sourness towards the overabundance of material, I enjoyed Funeral a lot, but if it wasn't for its convenient release date during a releases drought, I'm not sure if I'd have given it as much attention. The project has been known to surprise me occasionally, so I'm not having any decision set in stone, but I'm alright with sitting on the sideline from now on.

Written on 02.01.2023 by
RaduP
Doesn't matter that much to me if you agree with me, as long as you checked the album out.
More reviews by RaduP ››