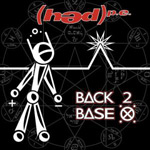 
Although originally marginalized as part of the nu-metal army of clones, (Hed) p.e. proved to be a far more talented and valuable kind of band. In 2004, they released Only In America, perhaps the best rap-metal hybrid ever recorded, and now it is time to check out their latest opus - Back 2 Base X. Well, it turns out that this is a fabulous album recorded by a band with enough chops to put them in the same league as Fishbone, Living Colour or 24-7 Spyz.

Unlike its predecessor, Back 2 Base X is a much more fluid and adventurous kind of album. Although at first it seems like this makes the music less focused, this is luckily not the case. The band is simply having fun, laying down some funky grooves and allowing themselves to shuffle a lot of genres. Mostly, however, this album has a decidedly punk-influenced direction, with many fast and concise songs. There is not as much screaming and grunting as there was on Only In America, as well as significantly less pure rap, but all this is replaced by catchy punkish refrains, so it is an acceptable trade. The lyrics are also less focused on relationships and more political. As is usual for (Hed) p.e. albums, the rapping is absolutely astounding, capable of competing with proper hip-hop bands. This is what set this band apart from nu-metal - Jahred Shane's capable rapping and great attitude. He has not lost his gift. Just listen to "Daze Of War" for some top-quality rap. For top-quality rap-metal, listen to "Lets Ride" and "White Collars".

Without a doubt (Hed) p.e. is currently the best rap-metal band out there. Back 2 Base X is just another proof of this. If you are interested in this kind of music and haven't heard this band yet, I highly recommend you do.

Written on 17.12.2006 by
jupitreas
With Metal Storm since 2002, jupitreas has been subjecting the masses to his reviews for quite a while now. He lives in Warsaw, Poland, where he does his best to avoid prosecution for being so cool.
More reviews by jupitreas ››