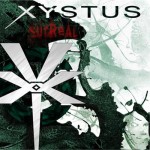 
Listening to "Surreal" and writing a review about it was quite the challenging experience to be honest. Not only is the music Xystus are bringing not qualifying to be put into my cup of tea, on top of that I had a very hard time getting into this particular release, let alone getting connected to it.
However, since you can't chance upon any new surprises if you always stick to the same routine and since I think I'm really on to something here, I decided to take a shot at explaining why Xystus should be worth your while.

First the facts: "Surreal" is the in 2007 released sophomore album of these Dutch metallers named after some architectural term from Ancient Greece. This release also marked the band's definite breakthrough to the scene, after their well-received debut three years earlier. Just that you know, last year already the band released the follow-up to "Surreal", entitled "Equilibrio". Now, this band doesn't beat around the bush; what immediately catches the attention from the first seconds of this album on is the band's distinctive sound characterized by a blend of unabashed power metal with a lot of symphonic hooks, keyboard bursts and some slightly progressive touches. Dream Theater but especially Kamelot are bands spontaneously popping into my mind when "Surreal" is spinning into my CD player.

And that's exactly where it gets tricky. While the resemblances are clear, the band is clearly challenging those taken-for-granted influences by trying to cook up their own and unique sound, of course marked with their proper stamp on it. In order to achieve this, the band is blowing the listener up over witty keyboard fantasies, creative melody excesses and other symphonic/progressive twists and turns - something you either will like or not. As center of attention of the band's inventiveness there is the six-piece-long "Surreal" concept, clocking in over twenty minutes - a sort of grand finale of the album if you want.

Two final caveats before you get to listen to this album: I had the feeling Xystus was somewhat over-focusing on the music themes on this album. And in that way, I couldn't help but noticing the clean vocal work, although being quite ranged and fitting the music really well, is unarguably lacking in power a little. Secondly I missed a stand-out track on "Surreal". I really gave this album more than one try, but in the end Xystus always kind of keep losing me, not only because they aren't exactly right up my street, but most importantly because of a moderate repetitiveness. Still, if you happen to be well up into this kind of music, this album should definitely entice your interest.
Written by Thryce | 23.01.2009