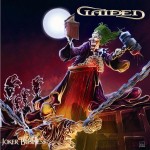 
Heavy Metal made in France? Yes indeed!
France had quite a few bands in the '80s that played some good heavy metal (ADX, Satan Jokers, Sortilège, Vulcain…), but they were rarely known beyond our borders. Later on, few and far between were the French bands that dared to play such music (Nightmare, Killers or Manigance come to mind).
And now, in 2009? Well, a few bands re-united (the aforementioned ADX and Satan Jokers for example), and it seems some new bands still love their Heavy Metal, as Gaiden here who have released this Joker Business, their first demo.

The business in question features three songs, for a total duration of 18 minutes. So yes, the songs are relatively long and pretty elaborate - I suppose that's part of the reasons they consider themselves to be progressive.
The music itself is, of course, heavy metal. Those of you who have listened to Ilungara will be in familiar ground, as Ivan is on vocal duties for both bands. I think he's a bit better here, kinda more aggressive and doing a bit less high-pitched vocals.
The influences here are quite clearly found in the long, epic, and progressive songs played by Iron Maiden, Helloween, and maybe there are some Rage touches too (mark me, I said 'influences', not 'copying' or anything like that). And then there's also this unmistakable, yet hard to define, French touch.
The production is OK, as all instruments can be heard correctly. But, the sound lacks power, which would have been a great bonus for the songs. Mind you, it's not that terrible, as for a demo it's pretty good actually!

So yes, Gaiden sound like a promising band. Not really original (yet?), but talented and easily delivering the goods. Personally, I'm waiting for their first album.

Written on 26.11.2009 by
Darkside Momo
Once your regular Hellfest reporter, now retired. I (strangely enough) listen to a lot of metal. And enjoy good beers, comics, novels and role-playing games.
More reviews by Darkside Momo ››