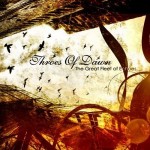 
Throes Of Dawn have been around for quite some time, I remember having listened to them from a friend about 6-7 years ago, to be more precise it was Binding Of The Spirit that I listened to, powerful and atmospheric as far as I recall. Quicksilver Clouds followed, having not listened to it though, but I suppose it moves in the same vein as its predecessor. A few years of silence and hop! The Great Fleet Of Echoes makes its appearance with Throes Of Dawn making their sound lighter and putting a greater effort on the atmospheric term.

These finnish guys in 2010 sound so multi-influenced that you actually get confused. One could say there are influences from the most fragile moments of bands like Anathema (like on some parts of "Ignition Of The Grey Sky"), Katatonia's Discouraged Ones, Paradise Lost and Tiamat, the vocals sound at times like a mixture of Nick Holmes and Johan Edlund, even like Fields Of The Nephilim's Carl McCoy without his renowned, haunting hoarse though, in terms of interpretation and feeling. Also, a general Green Carnation/Opeth aesthetic mainly from Light Of Day, Day Of Darkness/Damnation respectively is recognisable. I even sensed Nevermore's "Next In Line" upon "Velvet Chocehold" (00:39-01:07 par example) and Tiamat's Deeper Kind Of Slumber on "Soft Whispers Of The Chemical Sun", both on vocals and atmosphere which is this psychedelic feeling blending with gothic rock references, making the atmosphere so gentle. If I keep on writing more bands will come to mind, The Great Fleet Of Echoes is unoriginal in sound, but somehow all these influences have been blended together in an original way, if you get what I mean.

Melodic chords, some more dynamic guitar riffing, beautiful piano and floating keyboard passages, mainly clean melodic vocals with some grunting outbursts and any-tempo accompanying rhythm section, this is all you'll find on this album. I personally enjoyed it a lot, so, if you're searching for loads of unoriginal inspiration, melancholic (and a bit menacing at times) as well as soothing atmosphere, then The Great Fleet Of Echoes will be a gentle and pleasant to the ear sound excursion, through amounts of internal fragileness.

Highlights: "Chloroform", "Ignition Of The Grey Sky", "Soft Whispers Of The Chemical Sun", "Velvet Chokehold", "We Have Ways To Hurt You", "Lethe".

Written on 17.09.2010 by
KwonVerge
"It is myself I have never met, whose face is pasted on the underside of my mind."
More reviews by KwonVerge ››