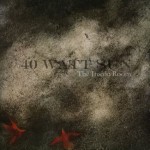 
When last we left Pat Walker he was playing guitar and providing heart-wrenching vocals for Warning on the powerful Watching From A Distance album. That album found itself on many staff "best of the 00's" lists. Then things fell through. Band imploded. Kablooey.

Four years later Pat Walker is back with two new mates, bassist William Spong and drummer Christian Leitch, a new band, 40 Watt Sun, and a new album, The Inside Room.

Glancing from a distance it seems that the new project is more of the same. Both albums are traditional doom performed by three pieces with five tracks spanning between 45 and 50 minutes. However, there are several differences between the two which jump out at the listener.

First and foremost, Pat really cranked the vocal dramatics up to 11 on Watching From A Distance, whereas in The Inside Room he's reigned them in. They're still packed with the familiar emotional punch (i.e. 'whiny' to some of you), but they are far more subdued. For those who liked his prior vocal works, you'll still enjoy his performance here. Those of you who were driven off by that aspect of WFaD might find this new approach more palatable.

The second huge adjustment is in the sound of the band. Despite playing a very similar style of music, 40 Watt Sun has a different personality. Whereas Watching From A Distance was very stripped down and stark, The Inside Room feels a lot warmer. The guitars are the biggest reason for this. Walker's guitar tone has changed as well. It's a more fuzzed-out overdrive style distortion which he allows to ring out a bit. Honestly, it basically sounds like they were cutting this album down the hall from Jesu, and Walker borrowed Justin Broadrick's rig to record the guitar tracks.

Spong and Leitch do a swell job providing the backbone of the album. The drums plod along, keeping the songs moving, but with some nice but not overwhelming flourishes that enhance the songs. The bass also functions in a similar manner, with some moments of expression that do not dampen the spotlight from the guitar-wielding front man.

All in all The Inside Room contains enough similarities to Walker's preceding project to give his audience what they want, but enough of a shift in sound to not just seem like Watching From A Distance Part Deux: Stalking From Afar. The new album and project are certainly strong enough to stand on their own, and in the (40 watt) sunlight, as opposed to residing in the shadow of Walker's past glories.

If you enjoyed Warning's final opus, it is extremely likely you will thoroughly enjoy this as well. If you are unfamiliar with his prior band, well, my suggestion is to buy both...