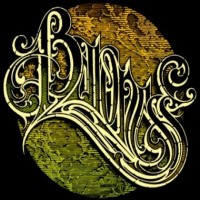 Having announced their plans to release a new album in the early goings of 2021 (is May still early?), with a whopping three hours of material with which to work, former sludge aficionados Baroness appear to be looking to expand even further beyond their initial confines by adding more colors to an already impressive palette of five full-lengths spanning 15 years.

Covering this outfit essentially amounts to analyzing the known life and career of John Baizley, whose name is synonymous with Baroness despite his insistence that it's very much a group project that incorporates the ideas and experiences of everyone in it. Through no fault of his own, his overwhelming presence of personality simply bleeds through every orifice of content they create, dating back all the way to the band's formation, which is where we'll start getting into Baroness. 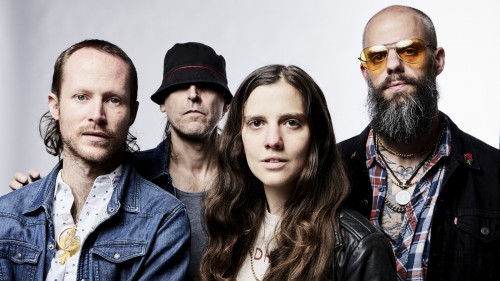 With such a tonal shift taking place throughout their tenure, it would be remiss to overlook their origins, as their first two EPs not only feature some of the band's most intense and aggressive work but also subtly reveal the potential for that growth and maturity longtime fans have come to witness and experience over the years. 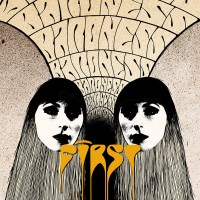 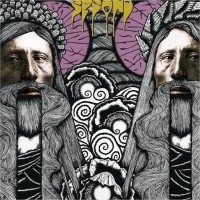 Baroness first made waves with the First and Second EPs, titles worth mentioning because, thematically, they differ from what would eventually come to pass. On the surface, everything appears to be of primitive design, adorned in some unrefined and simplistic cover artworks that are in themselves expressions of where the band is musically at this early stage in their development, merely hinting at the complexity and vibrancy of future material both on canvas and in the recording studio. The music therein reflects a youthful, unchained energy, with nuanced riffs and elongated rhythmic segments* that serve as direct evidence that more profound and reflective aspects of the band's established sound exist outside of the straightforward bombarding noise and controlled chaos that defines sludge metal as a whole. This foundation begins with heartfelt bluesy leads and warm bass lines that help carry Baizley's contrasting sharp melodies across both EPs, owing a great deal of gratitude to the groovy, bombastic drum work of Allen Blickle, whose trademark style is a significant yet undervalued reason why Baroness managed to stand out among their peers at the time. On the other hand, Baizley had yet to find his own voice, delivering industry-standard gruff barks and raspy shouts throughout, but they were serviceable given the band's pacing and tone, so don't detract or interfere too much with the excellent musicianship on display. 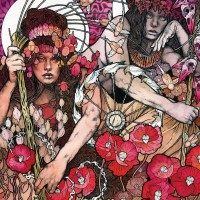 Understandably impressed with their offerings thus far, Relapse Records put pen to paper and signed the small-town group of friends, paving the path to what many consider to be the band's magnum opus: Red Album. Taking everything they learned during the writing process of their two EPs and amplifying those elements wherever possible, and replacing guitarist Tim Loose with Allen Blickle's brother, Brian, Baroness seemed to be firing on all cylinders. Each song feels distinctive, like a world of its own, while following a familiar formula of pensive intros, tense buildups, massive twin guitar harmonizing and dueling, and cascading drum fills and rapid short-burst bass blasts that all blend together beneath a blanket of smoke and alt-rock groove. Baizley shows off some vocal range, albeit sparingly, and more impressively tightens up his approach to lessen the impact of his headspace vocalizing technique, making for a dynamic performance that perfectly suits the majestic guitar work. There was an obvious choice to emphasize churning out catchy hooks while toying with various effects, and it paid off brilliantly. They never lose the intensity or frantic energy that accompanied their first releases, and they even manage to buoy those aspects with an appropriately fuzzy mix that still allows for the instruments to breathe -- especially the bass. Songs unfold naturally as if telling a story, complete in their structure, with undertones of curiosity. They also happen to be relentlessly captivating, especially challenging for a band looking to play around and try new things. Whether it was lightning in a bottle for a band that couldn't conjure up bad ideas if they were paid to or something less fortune-based is up to speculators to decide, but certainty lies in the fact that Baroness were seeking new horizons even before allowing for their first venture into the color spectrum to be digested by unsuspecting audiences worldwide. 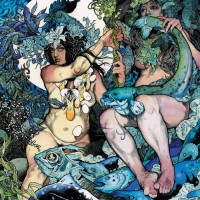 It didn't take long for Baroness to churn out another solid collection of progressive-tinged bluesy sludge, this time opting to scale back the aggression slightly to add combative layers of fun and melancholy by increasing their acoustic interludes and clean vocal usage. These calming breaks combined with the morose delivery are what set the stage for the modern rendition of Baroness, but Baizley and "returning" guitarist Adams remained steadfast in their approach to honor their origins, and so the bulk of the weight still rests with their intricate dueling guitar segments and rhythmic, pounding drums. The pacing is notably slower in many respects, shifting the tone towards one of relative relaxation, and the bass seems more streamlined and supportive this time around rather than offering its own sense of direction across each track. These aren't things that inherently make Blue Record any better or worse than Red Album, though they signify current and upcoming changes, which can be a deterrent for listeners who prefer their creature comforts in the form of music that doesn't deviate too far from where it started. In the case of Baroness, their stylistic growth and penchant for change come in small doses, but they're noticeable enough (especially with the benefit of hindsight) that anyone paying close enough attention could have easily predicted their tonal change in direction. What does come across as somewhat of a weakness compared to its predecessor are Baizley's harsh vocals, which sound a tad hoarse and restrained in order to prepare for times that call for him to belt, but he's careful and attentive in regards to his performance, and so they aren't pushed too heavily and often come by way of softer cleans to compensate. Besides, the musical integrity is of equal value, so the distraction is mild at its worst. 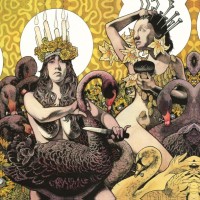 It wasn't until 2012 that truly showcased the band's emotional and musical growth to such a significant degree, with a two-part feature that pushed new lyrical boundaries and touched upon sensitive and personal experiences more directly than was the norm for Baizley previously. Despite the stripped-down commercialized approach veering into straight-up alt-rock territory at times, Yellow & Green still retained the familiar soulful Baroness sound, only diluted to be more easily digested. Instead of focusing on the structural complexity of each song and highlighting those intrinsic dueling riffs, this time around the band transitioned organically and found themselves writing purely evocative music, particularly of the depressive variety -- a substantial deviation from what many on the outside of the recording studio were expecting. Not quite as linear as some other arcs, there are still some noticeable connecting lines that help this giant undertaking remain grounded next to its siblings. Still, the rock-focused, interlude-laden, straightforward direction was such an initial shock to the system for anyone hoping for a continuation of Blue Record as much as it was a betrayal of the Baroness experience, and so it was judged for its differences as opposed to its content. There are great moments, tragic insights, and beautiful melodies scattered throughout its 75-minute length, but at times they don't resonate quite as strongly in spite of their personal nature. While the lyrics are obviously more poignant and less ambiguous than usual, it almost seems that shift in focus had unintended consequences of stripping the music of its expected magnitude. It can also be an overall difficult album to form a concrete opinion about, with such a significant contrast in sound between the Yellow and Green sides, making for plenty of grey area to debate -- an accurate representation of the inconsistencies found within. 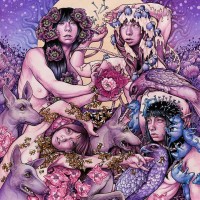 Shortly after embarking on their tour supporting the release of Yellow & Green, Baroness were involved in a bus accident that would cause some severe injuries (most notably Baizley's mangled arm that he could fold behind his back) and understandably led to Allen Blickle (drums) and short-serving member Matt Maggioni (bass) quitting as a result of the ordeal. Not one to be dismayed by a life-threatening experience, the crash and the ensuing chaos only seemed to fuel Baizley's aggression, whose workman attitude and tenacious desire to create culminated in the color combinations of red and blue: Purple. Unsurprisingly, Adams seemed to feed off of this energy, and the two set out to process their emotions in their most mature, rounded work to date, borrowing the most potent elements from all their previous releases and injecting it with a refreshing sense of vitality. Bassist Nick Jost and drummer Sebastian Thomson both helped elevate the band to new heights, bringing about a sense of rhythm and groove that was never explored to this extent before. Undeniably more accessible and formulaic as a melodic rock album, with radio-friendly hits and ear-worm worthy anthems full of catchy choruses, this served as yet a further reminder that the Baroness of old no longer exists in terms of creating new material, and also showcases the beginning of what appears to be a troubling pattern of odd production choices courtesy of Dave Fridmann, particularly with respect to the inflated reverb-heavy mixing that drowns out any sense of nuance -- something even more baffling considering Baizley's knack for precision and balance when it comes to the recording process. Despite its flaws, however, Purple serves as an excellent step towards the total progression of the band moving beyond its origins and features some of their strongest songs to date. 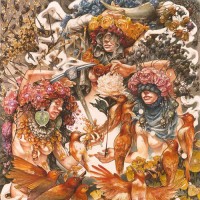 With the rhythm section now operating at peak efficiency with years of practice under their belt, Baizley had a solid group of talented and familiar teammates to lean on for added insights and inspiration, only this culminated in what can only be deemed their most poorly received work to date. This, despite the addition of Gina Gleason to replace Peter Adams, whose focus since shifted towards his own project in Valkyrie. While his trademark sound and unflinching chemistry trading melodies with Baizley is undoubtedly noticed here, there are unfortunately deeper issues plaguing the core. That Gleason actually hangs incredibly well on the same playing field, and her respect and admiration for Baroness have frequently been made apparent, is just a testament to this not being so much a performance issue as much as a post-recording one. Sure, there's some excess fat that could have been trimmed and a few straight-up questionable tracks ("I'd Do Anything" being the standout here), but the writing is still similar enough to Purple, and so the reception doesn't track with the band's trajectory. This is just added proof that rather than the musicianship or intangible descriptions of subjective aspects, what instead relegates Gold & Grey to the bottom of the discography barrel is the sound quality. It's a distinctly compressed record made to sound lo-fi and organic, but it simply doesn't suit this style of songs present. Baroness is a bombastic project, loud and crushing even at their most subdued, with a necessary emphasis on detailing during the recording process to allow for everyone's instruments to breathe naturally and fully. Despite its status as a blemish on the band's roster, the silver lining is that Baroness is still a band composed of adept songwriters and performers -- you just might need to discover that live, which is where they shine brightest.

As Baroness continue to branch out musically to acclaim and popularity outside the metal community, their steady back catalog of innovative and progressive sludge deserves to be remembered for paving the way to the eventual success achieved with their unique songwriting formula and dedication to their craft. Wherever life takes Baizley and co. at this point, the body of work currently on display is at the very least worth getting into.