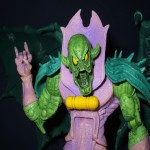 So the Dane Train released his list of favorite metal acts covering non-metal artists, but anything you can do I can do better. Or something. Actually, not better, just different. And by different I mean better. (Provided you're not the poster who thinks we are the same person… in which case your head might just have blown!) In any case, as with the artists on his list and mine, rather than show originality I'm simply going to cover his concept.

So, without further adieu, here is my list of favorite metal acts re-interpreting non-metal songs. There is no particular order here, just 10 tracks that amuse me.

Darkthrone - Love In A Void - much like their (soon to be appearing) Swiss overlords, the Norwegian black metal duo crop their hair up to Flock Of Seagulls heights, break out the black lipstick, and pay homage to the reigning queen of post-punk/new wave, Siouxsie and her Banshees with Love In A Void.


Exodus - Low Rider - The SF Thrash stalwarts take on the theme song to the George Lopez show, giving it a bit of a metal kick in the ass. The laid back shuffle gets some swagger and shred.


Anthrax - Got The Time - Frankie Bello and company kick the Joe Jackson song into high gear with an awesome bassline and solo with some crushing riffs. Probably the best track on their last album with Joey Belladonna. Sing along now! Chicken on my head! CHICKEN ON MY HEAD!


Celtic Frost - Mexican Radio - Wall Of Voodoo was a relatively obscure 80's new wave band which had an unlikely eMpTy Vee hit with "Mexican Radio". No idea why CF covered it… or how the Swissters even heard it. A good cover, even if Tom G. Warrior's vox aren't as cool as Stan Ridgway's quirky style.


Ministry - Roadhouse Blues - Somehow seems a fitting cover that Al and Co., known for raising hell, would pick this The Doors song. The original is an awesome beer-swilling, sing-a-long tune. This version isn't just a party, it's a Texas bar-room brawl… Roadhouse Black & Blues.


Buzzov*en - Don't Bring Me Down - The original cheery, cheesy ELO song annoys the crap out of me every time it appears on classic rock radio. Buzzers piss all over it and make it a definite, hateful downer that will have ELO fans sticking forks in the nearest light socket and ELOctrocuting themselves.


Anathema - Better Off Dead - The Pink Floydian Doomster's entry marks the first metal cover to actually take a fast song and slow it down. They turn the cheeky song mocking the over self-centered and distill it into a beautiful ballad, which thus beautifully mocks, well, pretty much all of Gen X onward.


Carpathian Forest - A Forest - CF's cover is another which takes a song and slows it down. In this case, taking a Cure classic with an awesome bass line and cool guitar parts and strip it down to a near dead electronic piece.


Danzig - The Hunter - Everyone's favorite Mr Mojo Risin impersonator takes on the Albert King blues classic, slightly altering the lyrics, has Christ stomp on the distortion pedal and turns it to a blues-metal good time.


Lawnmower Deth - Kids In America - Yet another metal band going to the 80's music scene to pluck an oddball for covering. This song is infectious, even with the tempo amplified, the guitars distorted as hell, and the sing-a-long bits even more sing-a-long-y.