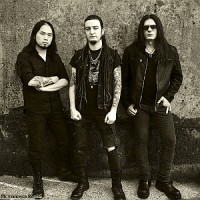 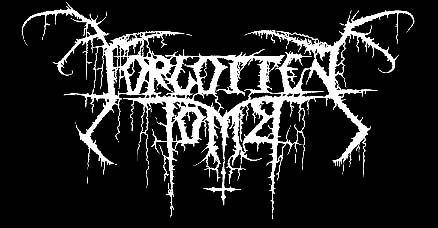 -As a kick off maybe you could introduce your band to those people that haven't discovered you yet.

They should read our biography on our official website at www.forgottentomb.com . They can find all the info they need regarding our releases too and everything else. The website is made for this, I guess.

-Tell us more about the new album "Love's Burial Ground". Will it sound different compared to your other albums?

New album is a mix between the best moments of our previous albums. You can find in it the occult sickness of "Obscura Arcana Mortis", the depressive melodies of "Songs to Leave" and the grim obscurity of "Springtime Depression". It's our most complete album. It lasts for 65 mins. of utter darkness and agony. You will find some new elements too, as on every new album of the band. "Love's Burial Ground" has a fucking malignant and sick feeling, there are faster riffs and at the same time very funeral Doom-like parts. I think it's a really various album, it's not boring at all. Lyrics are my best ones too.

-What are your plans for the future, after the release of this album?

Well, we're going to play several live-shows around Europe, and maybe in the USA too if things will move in the right direction. Definitely I think we'll spend the rest of 2004 as well as the first months of 2005 touring around the world and doing promotion of every kind. We want things to become bigger this time. We have many projects going on, for instance we will be featured on a Katatonia tribute-album with a "Nowhere" cover-version, as well as on a Ildjarn tribute-album with the songs "Morklagt Sti" and "No gleaming light". Then we'll re-release the debut MCD "Obscura Arcana Mortis" both on CD and limited LP through italian Eerie Art Records. Both the formats will come out in a really deluxe packaging with renewed graphix. The original recording will be completely remastered and there will be an exclusive new bonus-track. Definitely a must-to-have for all the FT followers, it will be out in the end of 2004. The long-awaited CD-reprint of "Songs to Leave" should be released before the end of this year too, in Digipack edition with new expanded booklet + 1 live bonus-track. We're planning to release the "Live Manipulation" DVD too before the end of this year, including professional live footage as well as backstage, interviews and extras. Regarding myself, I recorded some vocals on the new german Dark Fortress album "Stab Wounds", that is already out, and some other vocals and guitars on the debut-MCD of Hiems (the personal project of our bass-player Algol). During 2005 we'll have 3 songs on an American Horror/Sex&Violence movie soundtrack. There are plans for me and our drummer Asher to act in the movie for a few scenes too. Then we'll took some time to write and record our 4th full-lenght album, and I'll personally release some stuff with my side-projects Gaszimmer (Totalitarian Italian Black Metal), Died Like Flies (Serial Noize Death-Industrial) and Resonance (Dark Wave). 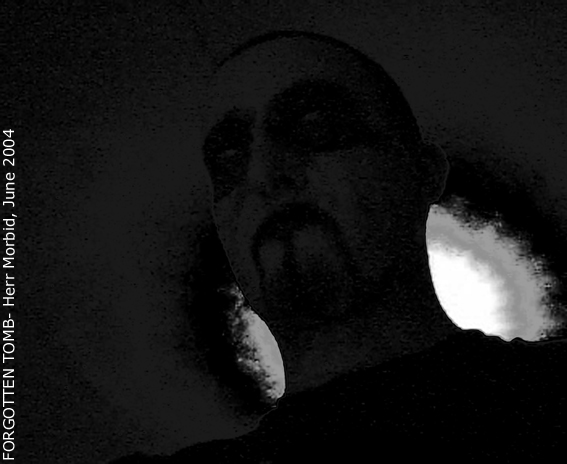 -If we look back in time, why did Torment leave Forgotten Tomb in the first place?

He was in a very bad time in his life, and we were both drowning into depression. From my side I used hate and depression as tools to create music, while he decided to quit.

-Well, at the moment you have some new members and you are not alone anymore. Is it better to work alone or accompanied?

Things are not changed so much, since we wrote material at home and then we rehearse it all together. Since we are good friends, it's a good situation I think. Anyway I remain the main composer of music and of all the lyrics. To be alone is good if you don't find the right people to play with. It seems that I found them.

-What inspires you when you write your lyrics?

In the past I was inspired mostly by personal depressive experiences and feelings. Currently I'm inspired by my thoughts and by my devotion to Negativity. I put all my vile and sick thoughts into my lyrics, being the best expression of my inner insanity.

-Tell us about your future gigs. Do you plan to tour outside of Europe?

We will tour Europe from August to the end of 2004. Currently we have some already confirmed shows. We'll headline "Ashes to ashes, Doom to dust" Festival with 2 gigs in Belgium and The Netherlands in August, then we'll support Absurd in Italy during September. We'll play at the "Misanthropic Violence" Festival in Austria on October. There are plans to play several shows in France and Slovenia too, then we'll play again in Italy together with Fluisterwoud + Bunkur and then with Nehemah I hope. I'm currently working on some live-shows in the USA for the end of 2004/beginning of 2005, there are good things in sight but nothing is still confirmed. 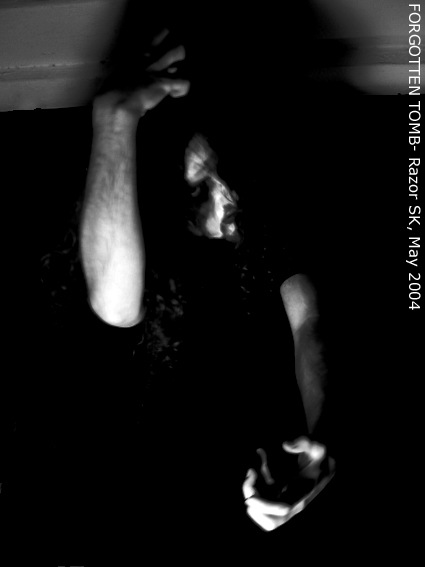 -Your music is very dark, depressive and suicidal. I think one thing that creates a stronger suicidal feeling in your music is your suicidal vocals (not to mention all the other elements in your music). I was wondering, do you use effects to enhance your vocals?

I don't use effects. There was only a distortion on vocals on the "Entombed By Winter" song from the "Songs to Leave" album, but I wanted it to sound that way. On the new "L.B.G." album vocals sound slightly distorted at times, but they're my natural vocals though. I usually put only some reverb and chorus on vocals. If you don't believe this, just come and see one of our live-shows!

-As we all know, Katatonia is one of those bands that have influenced you a lot. What do you think about the Swedish metal scene?

Nowadays there are a lot of good Swedish bands. Armagedda, Craft, Ondskapt, Leviathan, Malign, Funeral Mist, and many others. Katatonia and Opeth were/are something different, but they still remain among my favourites.

-I have also heard you criticize the Italian metal scene. What country is the best metal-country?

-Forgotten Tomb is a mixture of doom and black metal (which can also be called "dark metal") Do you have any personal favourite bands in this specific style?

Of course I like Bethlehem, and if we speak about Extreme Doom/Black Metal I like Dolorian, Bunkur, Ancient Wisdom, Nortt, Unholy, Khanate, Burning Witch, and many others, more or less all into Extreme Doom/Grim Depressive Black. It's very difficult to classify a band as "Dark Metal" in my opinion. 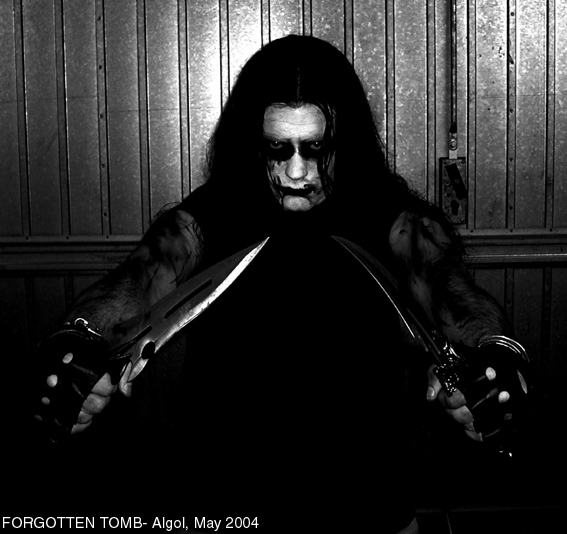 -In your official website there are some pictures of self-mutilation and you have also said that when you get angry you usually end up cutting/injuring yourself. Since when did you start to do that?

The question now sounds quite useless to me, 'cause I stopped to behave that way 1 year ago, for the simple fact that I learned a lot of things for my phylosophy and lifestyle during all the 2003 year... To sum it up in a few words, in the past self-injuries were useful for my mind, now they aren't, so there would be no reason to do that again. I'm spiritually evoluted and experienced now, and I don't feel the need anymore to do such things. I'm completely negative and cynic now, I learned to kill emotions and life itself, so there's no place for self-pity, feelings, and all these things. I'm in constant evolution towards utter Inhumanity. If in the past I was seriously depressed, now I'm only completely indifferent to life, people, love and every kind of human feeling, except for Hate I guess.

-You have said many times, that you believe many people are very stupid and that you hate them very much. What is the dumbest personality someone can have, and why?

Don't know, there are millions of stupid individuals in the world... I personally dislike several kind of different people. In my everyday life I feel uncomfortable in every place I may be, so all in all I probably hate everyone except for a few close friends. I'm personally disgusted by most of the Metal scene/people too. Well I think I hate young people above all. I fucking hate them all, this is the reason why the FT music/lyrics are often created with the aim to corrupt young guys and inspire them towards self-destruction of every kind, murder, and so on. Young people are more stupid and shallow than the other people. The new generation is mostly made of retarded subhumans, so I guess extermination would be the best solution.


-Thank you for you time. Anything else you want to add or tell your fans?

Yes, buy the new "Love's Burial Ground" album and die, if you don't already managed to do so with "Springtime Depression". www.forgottentomb.com / forgotten.tomb@libero.it .