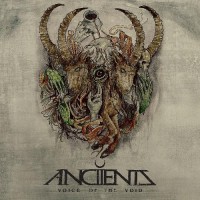 
Susan: What was the band's initial vision with Voice Of The Void and how does that differ from what you created in the end?

Kenny: We basically just wanted to try and write a great record, we didn't have a concept for the album at the time the music was being written for Voice Of The Void, other than, wanting it to be somewhat of a continuation of the foundations we had built on Heart Of Oak. I think we definitely have included a lot of the aspects of our sound on this new record, but the songs focus more on the heavier parts of the last album as opposed to the more classic rock vibes that were present then.

Susan: Voice Of The Void sees a more unique sound emerge for Anciients. Was this a conscious decision to go in a slightly new direction, and if so, what prompted it?

Kenny: Not at all. When writing, the songs just come out as they do, I was never trying to shoot for a certain sound or direction it's more of just a reflection of the music I was most into at the time. All we strive for, is to create music we enjoy playing and if it sounds good to us that's really all that matters in the end . As a collective we are all inspired by lots of different kinds of music, nothing is really out of the question as long as it feels honest and we can all get behind the ideas that are on the table.

Susan: What were some of your non-musical sources of inspiration at the time of writing this album, such as literature, art, world events?

Kenny: Once the music was written and it came time to start thinking of ideas for lyrics to coincide with the instrumentation, I found my self writing mostly about problems the human race faces at this point on time. A lot of it had to do with greed, the need for power, and not making choices for the greater good of mankind but more of a every person for themselves mentality. So basically inspiration came from the amazingly shitty things people are willing to do to get ahead of the rest.

1. Voice Of The Void
This was probably the easiest song to write since this band was formed. All of the riffs managed to come together really quickly. I believe it was the 2nd to last song we had completed prior to recording Voice Of The Void. The song is about not following the right path, and allowing the dark side to consume you regardless of the negative impact it will have on your life and the people you're surrounded by.

2. Buried In Sand
This is the longest song we have composed to date. It is the oldest song from this record, we had been playing it live for a couple of years before it was recorded. Lyrically it is about leaders abusing power and ultimately falling at the hands of the people they've oppressed.

3. Worshipper
This track is based around the idea of a group of people blindly following a religious cult leader. The instrumental section in the middle was the first idea I had when writing this song. The sections that come before and after were all arranged in the practice space and pieced together at a later time.

4. Pentacle
This song is mostly the brain child of our rhythm guitarist Chris Dyck. He had the intro, verse, and chorus written for this song, I just added a couple parts to it musically after the fact. This track features guest vocals on the intro and choruses from our friend Sebastian, he plays in the bands Auroch and Mitochondrian.

5. Descending
For the most part this song was written in the studio. I had been messing around with some alternate timings and came up with the skeleton for this interlude at home. It didn't quite come to life until I started working on it in the studio. I knew I wanted it to have more of a movie soundtrack kind of vibe, but nothing was set in stone when I started tracking it. I'm really happy with how this one turned out and I think it serves as a nice break in the middle of the record.

6. Ibex Eye
This song is basically an ode to Tool. I've been a big fan of them for many years and I guess it kind of translates in to this song. The drum work on this track is some of my favourite stuff Mike did on this record. The lyrical theme is spoken through the eyes of an ibex in the wild, watching the world be destroyed around itself.

7. My Home, My Gallows
This is probably the most rock and roll song on the record, the ending has some black metal hints, but for the most part it's just hard rock. This was a really fun song to record and a blast to play live.

8. Serpents
Probably the most straightforward song we've written to date. It has kind of an Alan Parsons Project feel to the intro, then shifts to more of a Seattle grunge sound for the remainder of the song. The lyrical theme is about the elite who rule this world.

9. Incantations
Aside from buried in sand, we had been working on the ideas that are in this song for quite a while. "Incantations" went through a lot of different changes from when it was first brought to the band. I had written the acoustic intro completely separate quite a long time before it was added to this song. It definitely was the one song that took the longest to get the final product finished, but I'm very happy with how this track turned out.

Posted on 31.10.2016 by
Susan
Susan appreciates quality metal regardless of sub-genre. Metal Storm Staff since 2006.