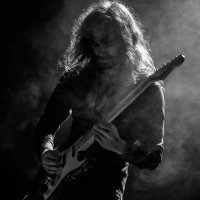 After the inevitable cancellations and rescheduling due to COVID, Soen were finally back in Athens for the first time after their last show in 2019. The performance was part of their European tour to promote Imperial, which came out last year. I contacted the band the day before their show and asked if there was time for a quick face-to-face interview, and guitarist Cody Lee Ford agreed to meet with me at the venue on the day of the show (May 27th, 2022), just before the band’s soundcheck.

Nik: Okay, so I am here with Cody Lee Ford from Soen. So you're just coming from Turkey and from a long trip since... I think you started in April touring Europe and you were in South America before that. How has it been so far?

Cody: It's been amazing. We've been waiting to be back on the road for, you know, a few years. So, to be able to go to Latin America, Latin America was such a pleasant surprise because it was sort of our first time there and we weren't sure how the shows were going to go. And it was just, it blew our minds. The fans were just unbelievable. And the turnouts were incredible. And yeah, they really treated us like gods there. It was... it was awesome. Yeah. And so, so now it's yeah, it's been the Europe tour. And we've been really, really pleasantly surprised here as well. I mean, it's some of the biggest shows around Europe we've ever played. So, it's always a good sign for the band and I think a lot of fans are very eager to go to shows again. It's really nice to hear the stories about how, you know, for some people we were the last band they saw before COVID, and then the first band they saw after COVID. So it's kind of a nice story to have that, you know, to feel like we're back to normal again. But yes, the tour has been incredible. Istanbul was very... all of Turkey was incredible. Thessaloniki was great. So we're excited for tonight.

Nik: So, you'll have this one tonight and another one in Tel Aviv on Sunday, and then you are having a break that you probably deserve. You must be very tired by now.

Cody: We are, we are a bit tired. But the thing is with shows like this, I mean, no matter how tired you are, you get on the stage and, you know, the crowd feeds you energy. And so we always know that that's going to be the case and yeah, we're really excited for these last two shows, but also very excited for a break and then lots of big... lots of festivals in the summer. So yeah, the Soen machine continues.

Nik: Are you composing or thinking anything about new music? I know Imperial just came out last year and it's my favourite album from you guys. I mean, I love the last three anyway.

Nik: But Imperial was fucking amazing.

Nik: Are you composing any new music?

Cody: Yes, yeah, yeah. The new album has already been started to... we've started to write it. Pretty much right when we get home we will continue to write. And so, it's very much a full time job, even when we're resting we're not really resting. It's... if you want to release an album every few years you have to… you have to go-go-go-go-go and so... yeah, we're working on it.

Nik: Can you tell me who writes what? Like, what is the songwriting process in your band?

Cody: Yeah, I mean, Martin [Lopez] has always been the sort of the fundamental writer of the band. So he kind of writes the foundation of the song. And then every other member kind of writes their parts on it, adds their own flavour to it. Sometimes, you know, sometimes, some of us have our own ideas. We bring them to the table. But yeah, it's it's nice.

Nik: It's kind of a joint process.

Cody: Yeah, exactly. Yeah, Martin builds the foundation and then we go from there.

Nik: What about the lyrics?

Cody: The lyrics are, I would say mostly Martin. As soon as I joined the band, I started to help a lot with lyrics because I am the only native English speaker in the band so... but I would say that Martin writes most of them and then I sort of make sure that it all makes sense and write certain lines. But yeah, over the years of course, Joel [Ekelöf] has written some lyrics as well, you know, Stefan [Stenberg] has written some lyrics. Everybody kind of contributes.

Nik: I kind of think that some of the lyrics from Imperial are very contemporary, for example, the lyrics from “Monarch”. There's a line that says "Who are the ones we are sending to war? They are the ghosts of our time". And I know that you have a Ukrainian bassist, Zlatoyar.

Nik: So I don't know how this is affecting the band or how he is affected during this tour.

Nik: I don't want to put you in a difficult position but if you can say something about that...

Cody: No, no, no. I mean, he's... he's... of course he's a very strong guy. I mean, we brought him to Sweden right before the war, because we knew the war was coming. And we wanted to make sure he was safe. So he's... he's had to play all these shows, while knowing that his country was being, you know, attacked, and his family is still there. And so yeah, I mean for him to be able to focus every night while all this is happening is... it's hard for him for sure. But he's been a trooper through all of it. And yeah, we support him, you know, we were there for him.

Nik: All right. So, I think the base of the band is in Sweden, but your bassist is living in Ukraine and you live in Canada. How do you guys meet?

Cody: He was living in the Ukraine. But now with the war happening, he's trying to move to Sweden. So he's in Sweden right now. He's staying with some of the Soen members in the meantime, while he transitions into becoming a Swede, basically. And yes, I'm in Canada. So, for a big tour I fly to Sweden typically, maybe a few days before the tour, we rehearse a few times and we hit the road. Sometimes we don't even rehearse, we just meet at the show and we just play. Okay, but this is the beauty of being in a band where everybody's really professional and very talented musicians. So you can just meet, you know, it's gonna be a good show. You don't... I mean, you know, rehearsals always help of course, but after you've played the shows, you know... for example, we've played the Imperial show a lot of times, so we know that we can just... in the summer just meet at a festival and we've got it, yeah. But any time you're rehearsing a new tour, of course you meet a week before, you have a bunch of rehearsals and, yeah, play out all the parts. Choose who plays what and everything, because sometimes the record is, when you're making a record, it's different than when you play live. Because on the record, you're trying to make it sound as big as possible. So, sometimes you have eight guitar parts. So you need to choose who plays what live, and how do we make it sound as big as possible live, without having ten people, you know what I mean?

Nik: Now that you mentioned the guitar parts, I wanted to ask you... I know that you're in charge of the lead parts mainly in the music, and I really love the leads on Lotus and Imperial.

Nik: I would like to have more of these in the next album, if possible. Can you tell me a little bit about the direction that the next album is going to have? Is it going to be similar to what came before it? Because, you know, the last three albums have... there was a natural progression from Lykaia to Lotus and then to Imperial... you went far away from being a Tool-sounding band to something that is completely your own, I think.

Cody: Yeah, exactly. I think Soen now, it sort of has more of an identity now. And you know, we like to play the technical bits, but we also like to have very anthemic sorts of parts that people can sing along to and that people really resonate with. So it's important to have that sort of balance and we've really found that, you know, the past couple of tours, you know, it's not just the progressive nerds that come into the show and… and we love these people, of course, but you have, you know, a lot more different kinds of people, younger audiences, older people who really enjoy things like Pink Floyd. And so it's been great to kind of see the reaction of these new albums and I think it's really resonating with people, so it's good. So it's, it's gonna be in a similar trajectory, of course. But of course, it's always important to keep things fresh and evolve and do something a little bit different. So we'll see, see what happens.

Nik: Okay, I don't want to take much of your time, so I'll just ask a couple of personal questions.

Nik: The first one that comes to mind maybe?

Nik: If you would have a famous director to direct one of your videos, and you could have anyone you wanted, who would you choose?

Nik: Your videos are very well made. I'm pretty sure you put a lot of time and effort into them and you choose, you know, talented people to make them.

Cody: Yeah, I mean, you know something? It would be fun to do something a little bit outrageous. So like, Quentin Tarantino or something. Yeah. I mean, just the mix of metal with sort of this over the top stuff that he does could be interesting.

Nik: Okay, so I wish you good luck for tonight. I'm really looking forward to it. And thanks for finding the time to do this interview in such sort notice. 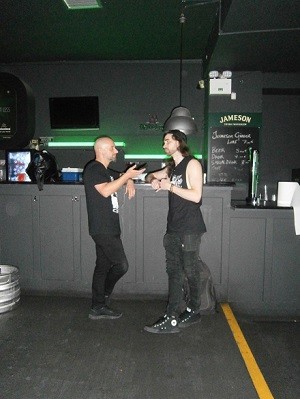 Cody Lee Ford being interviewed by a random guy


A few hours later, Cody and Soen offered a fantastic show in front of a roaring crowd. In a closed venue, with no air-conditioning, in a city with 32°C, I think I lost more liquids when they played “Antagonist” than what Formula 1 drivers lose after an entire race. And it was totally worth it.