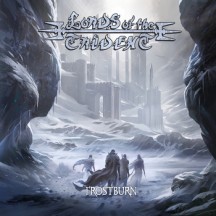 
Lords Of The Trident are doing for heavy metal what Gloryhammer do for power metal: play cheesy music in costumes with axes and make it completely serious and awesome.

I was expecting a joke band, a sub-par Nanowar with a crappy production and repetitive tunes. I really was. Instead, this music is a well-produced and highly melodic heavy metal that mixes a classic foundation with the right modern elements. Think straightforward heavy metal bands like Hibria but with a bit of fantasy/epic thrown in. Catchy tunes and many opportunities to headbang or sing along await the light-hearted metalhead.

With musician names like Killius Maxiumus and Fang VonWrathenstein, you know they're not taking themselves too seriously. Though if I didn't know any of their background, names, or stage show antics, I wouldn't have classified them as any more cheesy than, say, Dream Evil on their debut record. Frostburn is not unnecessarily over-the-top.

Mr. VonWrathenstein, on vocals, has a great command of his voice, which is smooth and very easy to enjoy. He demonstrates that he has a wide range, yet primarily highlights the upper middle. With more notes available to him, I hope he uses them on the next record as the vocal melodies here have a tendency to go dry every once in a while. "Kill Or Die" shows some great high notes, but those low notes are surprisingly soulful.

Sometimes its outrageously fun, other times it shows symptoms of too-many-mid-tempo-songs syndrome. Overall, I like them, and in addition to Frostburn I heard some great tunes when watching their videos from previous releases. Yet, the biggest downside to this is lack of variety. This also manifests itself in some dragging tempos; I'd like to hear what these songs could have been if they'd had a musical coach or producer in the studio yelling at everyone to push the tempos and play ever so slightly ahead of the beat.

Highlight track "Haze Of The Battlefield" begins with some interesting acoustic guitarwork before opening into a sweet chorus. The guitars definitely have fun and give us several nice solos throughout. Closing track "Shattered Skies" is just epic, shows an excellent vocal range, and is easily my favorite song. I almost wish it was placed earlier to break up some of the mid-tempo-overload, but I'll take it where I can get it!

Lords Of The Trident has talent, fun ideas, and a love of tr00 metal. While this particular record is imperfect, these guys are onto something. Keep on your radar.

Written on 28.02.2015 by
Susan
Susan appreciates quality metal regardless of sub-genre. Metal Storm Staff since 2006.