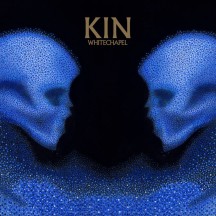 Managing to evolve their sound to great reception with The Valley, Whitechapel have the unenviable task of carrying this task forward on Kin and showing it was not merely a one-album fluke. Keeping to the formula that served them so well last time out, the band continue branching out from their roots without losing sight of where they started out from. Kin is as enjoyable as an album as it is a sharp turn in the road for one of the bands most closely associated with the deathcore genre.

With album opener “I Will Find You” continuing where “Doom Woods” on The Valley left off, Kin is both thematically and sonically a continuation of its predecessor, though it does make its own path as it travels in the same direction. Featuring a narrative of Bozeman exploring an alternative reality in the realm of ‘what if?’ in relation to his relationships to his family growing up, Kin is a walk down a dark path that is as fascinating as it is unrelenting.

While Kin may represent a dilution of the band’s sound and heaviness to some, it is at least compensated for by replacing the sonic heaviness with a lyrical and emotional weight in its place, with the album dwelling upon a level of darkness and grit that is as equally compelling. The refrain of “come back to me” on “A Bloodsoaked Symphony” as Bozeman calls out for his family gets into your head through your heart, rather than by splitting your skull open through brute force as the band had done so previously. If you found The Valley to be moving the band in the wrong direction for you, then Kin is not the change of course you may have been holding out for; while it does feature a solid dose of deathcore, it isn’t a return to the days when the genre was riding high and will likely have you skipping several tracks or parts of tracks, if not skipping the album entirely.

There are moments where the band do take a sonic leap rather than progression; had you said to me back when the band were putting out records like The New Era Of Corruption that one day the band would be making songs like “Orphan” and “Anticure”, then I would have called you crazy. More fool me, however, for as radio-friendly and almost polar opposite to deathcore as both tracks are, both are solid songs in their own right and mark some of the high spots on the album. Alongside tracks like the opening “I Will Find You” and “To The Wolves”, Kin excels in its breadth and diversity as it does in quality.

The one odd aside to all this is that apart from Bozeman, the rest of the band rarely stand out for better or worse for much of the album, with the exception of the odd solo or riff; while this isn’t so much an issue with the tracks being solid and enjoyable, there are few moments that you can look back and point to as a must hear/avoid moment. With that said, the band work well as a unit alongside a well-rounded production to create a collection of songs that make up a great album.

Whitechapel have managed to turn the corner without spinning out and crashing on the bend, evolving their sound without losing sight of their past and producing the best of both worlds. Kin will likely sit alongside The Valley as a high water mark and template for deathcore bands who want to branch out from their roots, featuring a sound and quality that is as enjoyable to hear as it is likely to be copied in the future.

Written on 27.10.2021 by
omne metallum
Just because I don't care doesn't mean I'm not listening.
More reviews by omne metallum ››