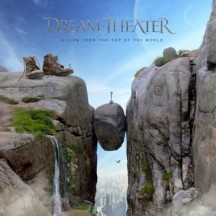 
From my view from the top of the world, I can see an album that is Dream Theater to a tee, for better or worse.

Having been increasingly alienated by the first few records the prog-metal titans released with Mike Mangini behind the drumkit, I was pleasantly surprised by Distance Over Time. It was a lean record, with most songs in the 4-to-7-minute range, and brought both hefty punch and memorable hookiness in a focused and streamlined package. I was intrigued to see how Dream Theater would built on the relative success that this record was, but they’ve changed trajectory in the meantime; four out of the seven songs on A View From The Top Of The World are longer than anything on Distance Over Time, and the title track is the latest song from the band to fly past the 20-minute mark. Dream Theater are going prog with a capital ‘P’ on this album; whether that’s a positive change of course will depend very much on your musical inclinations.

First, I must acknowledge that the album is pretty clearly a good record, at the very least. As far as popular metal is concerned, no one brings their technical A-game across the entire instrumental section of a band quite like Dream Theater, and A View From The Top Of The World is the most overt demonstration of this in at least a decade (I wonder what influence the recent activity of Liquid Tension Experiment may have had on this), so if you enjoy seeing virtuoso musicians flex their muscles, there’s plenty to get stuck into here. Despite this, the album does still contain solidly constructed songs, and there’s no entry on the tracklist that stands out as an obvious weak link; one could argue that “Invisible Monster” fills this role, but there’s no blatant subpar material on the record, which is helped by the band again opting against including a ballad. Dream Theater have over 35 years of experience as a band to draw upon, and it comes through clearly on this new album.

At the same time, I do find it to be an album that is easy to appreciate, but difficult to be excited about, at least early on. Across the first four songs on the record, there are moments that grab my attention and give me a sense of glee, whether it be the poignantly phrased guitar solo about midway through opener “The Alien”, which really gives off 90s Dream Theater vibes, or the excellent first riff/motif in “Answering The Call”, which appears first on chugging guitar, moving onto the keyboards before finally being taken up by the lead guitar to excellent effect. However, I find these tracks to be songs of moments that punctuate through otherwise forgettable backdrops; the extent to which these aforementioned moments stand out highlights the reduced engagement I have with the remainder of these songs. Probably the moment that really rams this home for me is late in “Sleeping Giant”; after a very extended and somewhat style-over-substance instrumental section replete with solos, the song moves into a strong mid-tempo groove that is given an epic vibe by the synths, only for the song to return to the song’s slightly unremarkable chorus.

I think there’s two issues that contribute to my ambivalence towards the bulk of these first few songs. First, when I reviewed Distance Over Time, I praised how the technicality was used impressively tastefully, with restraint applied in service to the songs; on A View From The Top Of The World, I feel there’s quite a few times when the band lose the forest for the trees and pile too much instrumental excess into the songs, particularly given that the core motifs in most of the tracks aren’t overly memorable. Second, it’s a bit of a dead horse by this point, but whilst there’s nothing wrong with James LaBrie’s performance on this new album, he’s not necessarily the most expressive vocalist, which doesn’t help with overcoming this shortfall in memorability; a livelier vocalist may have been able to provide the passion to elevate these songs, although ultimately it’s a moot point.

Still, I do find that the album picks up when it enters its second half. “Transcending Time” is perhaps the song that stands out most to me here; channelling very similar vibes to “The Looking Glass” from the 2013 self-titled record without quite such intense Rush influence, its joyful and playful tone is easy to be enamored by. The song that follows, “Awaken The Master”, despite its length and moments of excess, does have some very tasteful melodic moments instrumentally in its first half. Finally comes the title track, which has some stiff competition in the band’s back catalogue; “Octavarium” is a song that rises above the album it shares a name with to take listeners on a spellbinding journey, whilst the likes of “In The Presence Of Enemies Pt. 2” and “The Count Of Tuscany” are also filled with stellar sections. I didn’t find the last attempt at a song of this length, “Illumination Theory” from Dream Theater, to feature anything that quite reaches the heights of these songs’ peaks, and I feel the same about “A View From The Top Of The World”; however, whilst there’s nothing on this song that demands repeat listens from me, it is a well-constructed song with little that sags or does not impress. It’s not a knockout punch, but it’s a successful return to colossal song lengths for the band after nearly a decade.

I don’t think A View From The Top Of The World is an album that will cause any real controversy; it’s a strong embrace of much that has typified the band’s music since the turn of the millennium, when they advanced the heaviness and technical focus of their sound. Those, like myself, who appreciated the trend on Distance Over Time might share some of my ambivalence, but ultimately I imagine longstanding fans will get a good amount of enjoyment out of this record.

Written on 26.10.2021 by
musclassia
Hey chief let's talk why not
More reviews by musclassia ››