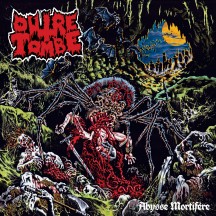 
Outre-Tombe’s Abysse Mortifère is killer Canadian death metal with French lyrics. It’s so raw and filthy that it makes even the most beautiful language in the world sound putrid and ugly.

The music you hear in your formative years never leaves you. It always stays with you and when you hear something that resembles the old sound that you first heard and fell in love with, you just cannot but bang your head. Outre-Tombe’s style is not original or authentic in the sense that even those remotely familiar with death metal can recognise the band’s main influences; Abysse Mortifère is born of the sounds of Autopsy, Entombed, and Bolt Thrower. So yes, these death metallers from Quebec have learned from the best.

This is death metal incorporating thrash, crust, d-beat, and it really encapsulates everything I have ever loved about the genre; the swampy atmosphere and the unrelenting energy are both there but, above all, the riffs reek of old-school death metal. But this is not just another rehashing album, as far as I am concerned. Most OSDM-recycling bands are boring because they lack the riffs and the songwriting chops of the old classics. Outre-Tombe, on the other hand, write cool death metal songs that are inspired by the old and classic, but they build on that material and make it sound great again. These are riffs to headbang to, plain and simple, peppered with ripping solos that pierce through the brutality. Add to that, some of the most disgusting ‘Martin van Drunen-meets-Chuck Schuldiner’ vocals in the business by a guy called Crachat (roughly translated as ‘spit’, which is so very fitting) and some skull-clobbering drums with a sick snare sound, and you have the whole picture.

Outre-Tombe wrap the whole thing up in 37 minutes and during this little time they miss no chance to just pound you senseless. Some might say that the songwriting is one-dimensional and that the songs sort of blur together; this may be partly true for the first half of the album but from the excellent “Exsangue” onwards, the groove and the hooks are in abundance. The leads kill when they appear, especially on “Nécrophage”. These two tracks are my favourite, along with the opener and the closer.

I also have to point out that much of my enjoyment of this album is due to the production; Abysse Mortifère has the cvlt sound of a well-recorded demo that was never released three decades ago and feels like the whole band is playing live in front of you.

My ears are tired after countless hours of sifting through half-assed material that is being promoted as the next Obituary, Pestilence, Dismember, etc. I am not here to sell you this crap but I guarantee you that Abysse Mortifère brings forth a breath of fresh air the stench of rotting flesh that death metal is supposed to be all about. And, with this record, Outre-Tombe have now unleashed three out of three total bangers.