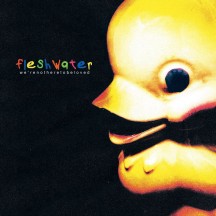 
Vein.fm don't travel back to the 90s to be loved. That's just a potential side-effect.

When I first covered their music, back when they were still called just Vein, Vein.fm surprised me with their mix of turn-of-the-century nu metal and metalcore, two of the most maligned subgenres in metal, somehow finding ways to take the best elements and branches of both of those. The follow-up album, This World Is Going To Ruin You, had some elements that were closer to alt metal than two either of those other two subgenres, but it retroactively made sense, since they had already started this Fleshwater side-project and released a demo in 2020. Formed by three Vein.fm members alongside singer/guitarist Marisa Sharir, active under the Mirsy name, so it is in a way more than merely a side-project.

It is a bit easy to call this sound as merely another Deftones-clone. And trust me, I'm fighting the urge. Truly, the similarity in the shoegaze-y alt metal sound scream Deftones, and while that's not a rare occurrence, that probably just goes to show how influential and commanding of a legacy Deftones have. But listening to this I'm also reminded of Filter or Smashing Pumpkins or Hum or Sonic Youth or Coaltar Of The Deepers, with the sound of We're Not Here To Be Loved often staying in territories closer to alt rock than alt metal, with its incursions into metal doubled by the hardcore leanings that are still evident in the harsh vocals.

What really saves Fleshwater are the dual vocals. On one side Marisa's vocals are a slightly sultrier version of that 90's apathetic angst, whereas Anthony DiDio matches that energy, while also alternating to the aforementioned harsh hardcore vocals occasionally supplementing the heavier sides of this record. Each vocalist knows how to act as a support for the other, even if Marisa seems to have a larger presence overall. At a 27-minutes runtime, We're Not Here To Be Loved can feel closer to an EP than a full length (there's only so many Deftones songs you can write), and with some of the best songs here being in the 1-2 minutes range, Fleshwater use brevity to their advantage, making the great melodies that they write have more impact.

No matter how much I enjoy the sound (and I really do), I can't deny how dates this sounds. And I get that this is part of the appeal, but it's getting harder to justify reviewing every Deftones clone (ah, I lost to the urge) simply because of how much I enjoy the vibe. Still, Fleshwater have been doing some things to distinguish themselves, I just wish they'd capitalize on that more in the future.

Written on 17.12.2022 by
RaduP
Doesn't matter that much to me if you agree with me, as long as you checked the album out.
More reviews by RaduP ››