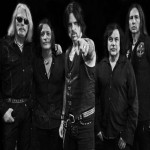 Hard rockers Black Star Riders have signed deal with the UK label Earache Records and will enter the studio in Los Angeles on October 14th with producer Jay Ruston. New album will be out sometime in 2023. The latter will feature a different lineup from the band's previous releases, due to founder and lead guitarist Scott Gorham's decision to step down from all recording and touring commitments. The band have announced drummer Zak St. John will be joining them to record the new album.

Frontman Ricky Warwick comments on label signing: "We are extremely pleased to announce our new deal with Earache Records. We had an amazing 8 years with Nuclear Blast and I want to thank everyone there for their commitment and dedication during this time but it was time to part ways and Earache have well and truly stepped up to the plate! We can’t wait to start the new relationship with the great team there."

Guitarist Christian Martucci states: "We have decided to let the abundance of rescheduled shows in 2022 blow over so we can come back in full force in 2023 without any distractions. We can't wait to see all our fans and followers again after what seems like an eternity off the road and we appreciate no end their continued support and loyalty to BSR."