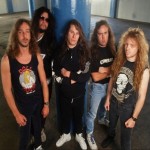 Dark Angel guitarist Eric Meyer recently posted a photo on Facebook of himself and drummer Gene Hoglan, indicating that they are rehearsing new material for their long-awaited fifth album, which they first began work on back in 2014 but progress on it has since been slow. No further details were given, but the band's first studio album since 1991's Time Does Not Heal is reportedly due for release later this year or next year.