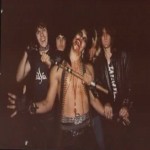 Power/thrash metal icons Nasty Savage have been playing gigs here and there much of the time since the release of their latest album to date, Psycho Psycho (2004). But in a recent interview with Mark Kadzielawa of 69 Faces Of Rock, vocalist Nasty Ronnie and guitarist David Austin confirmed that they are in the process of writing their first full-length record in nearly 20 years, which has slowly been taking shape since the band's most recent reformation back in 2016.

Guitarist David Austin added: "We've had plans and then we've had setbacks, you know, COVID didn't help things out, but...you know, in 1985, [Nasty Savage] was our job to create music and record, right? So, and in 2022, we work, we're busy, my son graduates high school next week. You know it's like...it's not the want to is there, it's the when to, it's when you have time, you know? So we do have three new songs right now and we've actually been working on them for a while and then we get sidetracked, you know, some of it's my fault just because how much I work. But we're trying to...I can tell you right now, this lineup that we have right now with [bassist] Scott Carino and [guitarist] Pete Sykes and [drummer] Jim Coker, hands down as good as definitely as good as the original lineup that we have, that's how we're tight. We get along, we're having fun, and we're trying. It's not something that we don't want to do, but it's just a matter of having the time to do it."