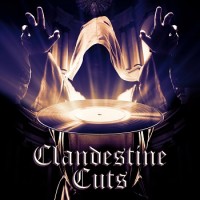 Every track on this debut EP by Chiliasm is 4'20''-long but this is not a stoner release, as you'd expect. In fact, it is as far from the one-riff-per-hour, slower-than-a-tortoise stoner metal music as possible. Flesh Over Finite is an extremely technical, super-fast, ultra-melodic extreme metal affair that - if not anything else - will leave you in awe of the skills of the three main musicians involved. And with a guestlist of members from bands like Virvum, Bestial Invasion, Equipoise, and Chthe'ilist, you can understand that there is a lot of talent pouring from this release. I have to say that I am not a fan of programmed drums but, hey, this is just the beginning for Chiliasm. On the other hand, the dual vocals (deep death growls and high-pitched blackened shrieks), the neoclassical lead guitar melodies, and the unbelievable fretless bass are the points of reference to focus on. There are four tracks on here competing with each other over which one is the fastest/catchiest/most technical. I don't get the reasoning behind the duration of songs but if there was one purpose that weed could serve in this case, it would be to slow down your heart rate after the exposure to such an overwhelming amount of sonic stimuli.

Mist Tower's Obsession is mostly an EP in name, as it's towering at a pretty long 35 minutes of runtime spread over 5 tracks. Hailing from Odessa, Ukraine, Mist Tower claim to have "gathered to smoke and play music", and listening to Obsession I can attest that that's most likely true. Obsession has a pretty specific stoner sound, where the riffs are both spaced out and massive instead of going with softer fuzzy tones. The whole album is filled with these guitar textures that feel colossal. It sounds like plodding through a mountain of haze with the weight of 10000 drugs on your back. The tone is properly doomy, the production properly hazy, but it's the vocals that could resemble something more akin to alt rock / britpop ran through a trad doom filter that really seal the deal into making this sound more unique than the myriad of other psych bands. Though the whole thing sounds less jammy, the droning repetitions and the amazing guitar textures ensure that this is as hypnotic as it gets, though it's more the kind of hypnotic that beats you into submission rather than relaxing you out of your senses, even if there's some of the latter too, especially in the last two tracks.

Mixes of sludge and death metal aren't exactly that new, even if they're still pretty rare, but Withered, Black Royal or Glacial Tomb all havε had music that blended the two genres. And it seems like sludge and black metal is a bit more of a common occurrence, with stuff like Wolvhammer, Celeste, Lord Mantis, and This Gift Is A Curse among many others. Putting a simple genre tag on Thra is quite difficult. A lot of it is sludge, a lot is doom death, some of it is tinged more with black metal. Hailing from Phoenix, Arizona, Thra have been putting out quite a few releases, and Clarvoyant is more of a single than an EP, because it is comprised of the titular 12-minute track, and a newer version of a song from their 2019 Gardens Of Rot EP. The production this time is more well-rounded and it stays perfectly between the rawer rotting death feeling and a bit of a punchier doom feeling, while maintaining a bit more cavern in how claustrophobic it sounds. Clarvoyant stays in the doom death side of things a bit more than its predecessors, but the sludge is pretty apparent in the re-recorded version of "Trial By Stone", and judging by how the production quality increased, I'd say it was a pretty good call to re-record it.

A one-man instrumental djent EP might not be everyone's cup of tea, but Avenoir, the second EP from Colorado's Derek Woolley (aka Dok Wol), offers more than just crunchy polyrhythms, so one could be pleasantly surprised. "Anhedonia" does kick off with djent syncopation, but there's also a substantial post-rock side to this song courtesy of the clean guitar, whether it's airy and ambient or more tremolo-driven; the combination of post-rock and convoluted modern prog instrumentation works quite nicely, as does the vibrant synth work briefly featured during "Morii". Avenoir doesn't go particularly outside of the box, although the trappy electronic quasi-interlude "Chrysalism" serves as an intriguing diversion, but the core instrumentation on Avenoir has the intra-song dynamics (see the alternation of ethereal softness and punching grooves on "Kenopsia"), satisfying crunch and impressive technicality to sustain the record's appeal throughout.

Borboropsis is a genus of flies in the family Heleomyzidae and its four known species are attracted to carcasses and faeces. It may be a coincidence that Borboropsis consists of four members, but it seems safe to assume that the band name was chosen wisely, because the work of the guys from Dayton, Ohio, sounds exactly as the musical accompaniment to the smell of decay and the slow decomposition of a lifeless cadaver. Decorticated Burial Of Delirium is the band's first EP and the three tracks included can be best described as a blend of cavernous death metal and straightforward, gritty and well-written doom/death, leaning slightly more towards the death side of the genre. Unnecessary gimmicks are dispensed with, which is a further plus point in the band's favour, for even without keyboards and samples they manage to build up an ominous and oppressive atmosphere. Old school doom/death just the way it should be.

Nexus Imperium is the debut EP of Greek black metal duo of the same name. The band goes a long way back but this is the first official release, since a demo that was recorded by the founder, Synapse (guitars, bass, synths), was never released. According to their Bandcamp page, they are set out to explore space, lifeforms and evolution through dark arts, and this particular EP narrates the beginning of time, when the Cosmos expanded through darkness. I guess it is safe to say that the music is some kind of cosmic black metal and the use of synths plays a big role in that, as is immediately shown from the mood-setting opening track. The blastbeats make their first appearance on "Cosmic Disturbance" but it is the last three songs that are the longer and feel more complete. With these, Nexus Imperium present an interesting and avantgarde-ish take on black metal, sounding like a mix between Blut Aus Nord and Deathspell Omega, with sci-fi, eerie synths and special effects throw in, as well as Attila Csihar-like vocals. This is experimental, dissonant, and atmospheric black metal by a band that shows really big promise.