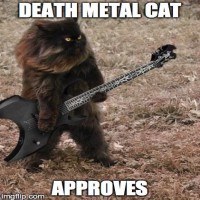 The sun is out and summer is here…and yet I continue to wear black band t-shirts. With a busy month of gig-going thanks to several rollovers, I decided to round up a week of gigs I attended recently and pass judgement once more on those who deigned to entertain me. Now, some of these shows aren’t strictly metal, but they run close and I think are relevant enough for inclusion here.

Now, I am a huge Bad Religion fan and, quite frankly, find their omission from Metal Storm to be a criminal oversight; so you'd better bet that I am jumping at an excuse to somehow involve them on the site. With this twice-postponed 40th anniversary tour finally taking place, I was eager to see how the show measured up to their 30th anniversary show (over a decade ago, funnily enough) and I was not disappointed. Yes, age is slowly catching up with the band, but beyond the visuals it doesn’t show, with the band’s high-energy punk rock still as youthful as it was all those years ago. Greg Graffin still manages to balance aloofness with being a punk rock star, with precision showing all those years haven’t changed him - he being one of only two members of the original lineup present tonight, the other being Bentley. It didn’t change the spirit of the performance at all. The set ran through the usual hits and some deeper cuts, such as “Man On A Mission” and “Kerosene”, which slipped into the set list like a hand in a velvet glove. Well worth catching if you get the chance to.

Now, this is where I lose a lot of my hard-earned credibility, as I openly admit to going to a (shock horror) festival that includes a lot of pop punk acts (forgive me, Radu, for I have sinned) alongside more traditional punk acts and metalcore artists. While this was one of the weaker lineups in recent years, there was still plenty to see and plenty of sun to unintentionally catch a tan in. While I won’t review the majority of bands I saw over the day since they’re far removed from being relevant here, there are a few artists included on the site whom I saw and a few who’re closely related enough to warrant a quick write-up.

Punk Rock Factory
A fun band to catch if they’re at a festival near you, a band who play punk rock covers of songs ranging from Disney all the way through TV themes, chart hits, and metal/punk classics. With some funny stage banter in between, they’re an ideal band to have a laugh and a beer to if you have nothing else on.

The Vandals
One of the reasons I love this festival so much is that it gives me the opportunity to see a lot of old-school punk bands I grew up listening to (those Tony Hawk game soundtracks still hold up to this day), but never thought I’d get to see; this year I got to cross off two, with The Vandals up first. A band with both a solid catalogue and a great self-deprecating attitude that saw them mix great musicianship with funny showmanship, the band was one of the highlights of the day for me, running through all their hits, from “Urban Struggle” to “I’ve Got An Ape-Cape”. Bonus trivia, I didn’t realize that Brooks Wackerman was their touring drummer, guess Avenged Sevenfold have no immediate plans in the pipeline. 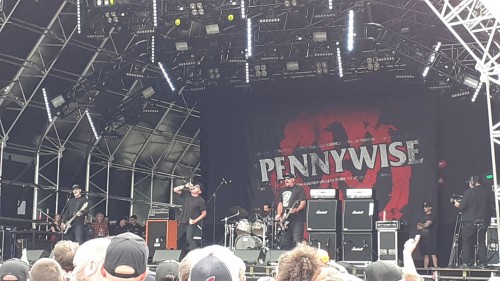 The second skate punk band I have long wanted to see and got to cross off my list was California’s Pennywise. With just 45 minutes on stage, the band made the most of their criminally short set and managed to play a substantial number of songs (one advantage to having songs about two minutes in long) with an enjoyable level of audience interaction. While Lindberg initially came off as seemingly wanting to anywhere else but up on stage, he slowly grew into the show and by the end of set was bouncing around and wanting to continue beyond their allotted time. Playing a set that spanned much of their discography, the audience got a solid introduction to the long and storied career of one of the best bands to ever appear on the Epitaph roster.

not pictured, Goldilocks and the 2 other bears

One of the last bands I listened to as my metalcore phase drew to a close, Beartooth were a band I had wanted to tick off my list for a long time, but never enough to go to one of their own shows; luckily, Slam Dunk gave me the opportunity to do so with minimal effort. While a day of drinking and constant sun had started to catch up with me by this point, the band were able to entertain me and convince a sizeable chunk of the audience to mosh and move. Unfortunately, the band were victims of a fairly poor audio mix, with the bass and drums up way too loud to the point of the guitars and vocals being inaudible for a large part of the start of their set. While Shomo’s audience interaction came off as a bit preachy, he was on point vocally once the mix cleared up and he roared with zero consideration for his vocal chords. While I enjoyed last years Below the songs sounded so much better here and were among some of the best received tracks of the day.

As if to atone for my sins of erring from the path of metal the last two weeks, I rejoin the congregation inside the intimate surroundings of the Boston Music Room for what has to be one of the most intense gigs I've ever been to, if not the most intense. Ostensibly a warm-up show for the band’s performance at the Download Festival the following day; it turned out to an experience worthy of its own merits for the sold-out 250-capacity venue.

The two-band bill kicked off with Ingested, a band whom, despite playing many festivals I have attended over the years, I had yet to actually see perform. With the sold-out crowd packing out the venue from the off, Ingested made a solid case for rivalling the headliner as the most anticipated band on the bill judging by the enthusiastic audience response and sea of band shirts among attendees.

Introducing themselves as “Britain’s best death metal band” the band tore through a 45-minute set that served as solid evidence that, although the band can’t displace Carcass atop that throne (where’s their Jubilee weekend celebrations?); they were likely to ensure a bright future for the genre. With mosh fuel anthems in “Invidious”, “Impending Dominance” and closing “Dead Seraphic Forms”, the band were on top form throughout and took no prisoners as vocalist Evans controlled the chaos from the stage, inciting mosh pits and walls of death with barely a break for the weary bones of this reviewer.

After a short break, perhaps the most extreme metal band ever to have put riff to record emerged onstage, though they declined to bring souvenir coathanger merch, brought its aural assault upon London once more. Once the dying notes of Thin Lizzy’s “The Boys Are Back In Town” had faded, Dying Fetus started up and didn’t stop, unleashing a gamut of death metal that drove the crowd to another level of insanity.

[img4 l]With a name like that, I was expecting a traditional folk band[/band]

Unsurprisingly, the band’s live ethos followed their musical one, go for the jugular and never let up. With a set list primed to make the crowd go wild, the band kept up the power through the likes of “Subjected To A Beating” and “Grotesque Impalement”. Gallagher and Beasley somehow managed to balance moving their fingers in an absolute blur with guttural vocals with ease, not missing a note even when the stage resembled a diving board more than an actual performance area. 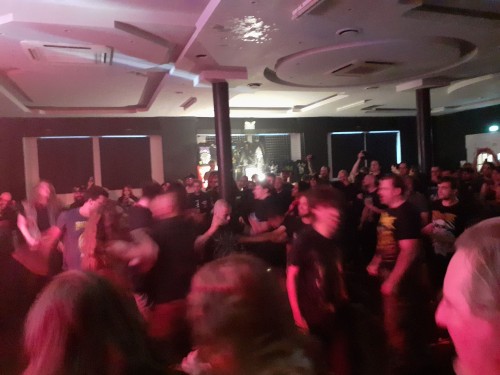 After having caught a stray elbow after jumping into the mosh myself (for old time’s sake), I took a breather in the outside area. Upon returning back into the venue, this bespectacled attendee found his glasses a wall of steam, such was the heat and humidity inside the tiny venue. Though there were audience members flagging from the humidity, intensity and, of course, beer towards the end of the set; the band showed no signs of letting anyone off easy. With the news that the band had recorded a new album (but no previews were to be played tonight), the band launched into a set-ending trio of “Your Treachery Will Die With You”, “Wrong One To Fuck With” and perhaps the greatest power ballad ever written, “Kill Your Mother, Rape Your Dog”, that ensured the audience had nothing left to give come the end of the show.

With that, my week of shows drew to a close, thankfully saving the most intense show for last to enable me to use a short break in between concerts to allow my body to heal up. I had enjoyed going back to my roots and delving back into my first love in punk before ending the week gaining perspective as to how far my tastes have expanded over the years by seeing a band I would have recoiled from in confusion many moons ago, yet now embrace with gleeful abandon in Dying Fetus. Summer is here; the time is right for moshing in the streets.

Written on 18.06.2022 by
omne metallum
Just because I don't care doesn't mean I'm not listening.
More articles by omne metallum ››