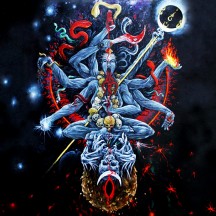 
Eastern influences in rock-derived forms of music have come quite a long way since the days of George Harrison and Sgt. Pepper's Lonely Hearts Club Band. With metal in its modern state, we definitely have plenty of bands that follow suit (Nile, Melechesh, and Rudra, to name a few). The problem I find with a lot of this Eastern-infused metal, however, is that the metal almost always seems to trump the Eastern elements, and being the Oriental f̶a̶n̶a̶t̶i̶c̶ ̶ nerd that I am, I find myself looking for bands that strike more of a 50/50 balance between the two. This year, I was lucky enough to get my wish, in the form of Cult Of Fire's sophomore release मृत्यु का तापसी (that's "Ascetic Meditation Of Death," for all you heathen bastards who have not yet mastered the holy Sanskrit).

With their 2013 effort, Cult Of Fire fully immerse themselves in the themes behind their music to a degree that almost comes across as slightly transcendental. Right off the bat, these Czechs drag you deep into a world of Vedic rites and ancestral Hindu deities, and there's no turning back from there. On the one hand, मृत्यु का तापसी is firmly grounded in a very powerful and well-executed folk atmosphere (sitar, native percussion, clean chants), easily rivaling Negură Bunget at some of their best moments (check out the first track, or the closer, in particular). These elements are somehow always delivered in a way that makes them feel highly genuine and believable, almost as though you're not really listening to a black metal band in 2013, but to an Indian tribe of a bygone past. They send you places, to say the least.

At the same time, मृत्यु का तापसी is indeed a black metal album at its core, and this sound more or less dominates. Cult Of Fire, however, certainly don't adhere to the typical formulas of the genre, and have a very interesting way of employing song structures similar to some of their contemporaries, whilst at the same time retaining their own identity. The riffing on this new output, for example, is for the most part quite groovy and at times even catchy, conjuring thoughts of Nachtmystium during their Black Meddle era (Track 2 and Track 7, notably). In addition, the album also has some guitar leads here and there that are quite minimalist and melody-centered, reminiscent of The Meads Of Asphodel's style (Track 4, Track 6). But no matter the correlation to other bands, Cult Of Fire still maintain a sense of distinction, a feeling that the music they create is unquestionably their own.

Furthermore, मृत्यु का तापसी is without question one of the best composed (if not entirely original) black metal albums of the year. The folk and extreme elements balance themselves out almost flawlessly, and there's a strong sense that Cult Of Fire embrace Eastern culture because they're truly interested in it, not just for a useful band image, which certainly lends them a higher degree of respect than your average group. Listen to Slayer and worship Satan? Forget that nonsense, listen to Cult Of Fire and praise Kali! *Note: she's right there on the album cover, to make it easy for you.

Written on 23.11.2013 by
Apothecary
Comforting the disturbed and disturbing the comfortable since 2013.
More reviews by Apothecary ››