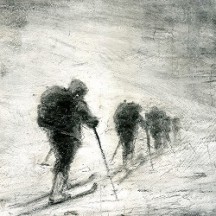 
Touched by grace once more, the Russian band known as Kauan carries on with their folkish doom atmospheric brilliance with another composition that spans the whole album. After the impressive Pirut, I was a little weary when Kauan's mastermind Anton Belov announced that this was going to be another epic composition. After all, how could it compare to the sheer genius of Pirut? So yeah, I was a fan of the band coming in, but this album does not disappoint. Let me rephrase that. It has all the makings of a classic masterpiece for years to come.

Their music is somewhere midway between post-rock and folk with classic music and doom influences. This is not your traditional metal album. It is slow, self-reflective and fascinating music. Sorni Nai narrates the journey of the unfortunate hikers involved in the infamous Dyatlov Pass incident. This is a sure way to expand your culture. With haunting female voices from Alina Roberts Belova and the emotions brought forth by the string instruments of Anatoly Gavrilov, Alexandra Altukhova, Julia Makarenko and Vladimir Babutin, this album crafts an eerie atmosphere where joy, wonder, fear and hope rival with unknown and horror. As usual, the voice and riffs of Anton Belov paint this amazing story. And yes, the vocals are in Finnish as expected.

This Russian band has some amazing albums under his belt, yet Sorni Nai manages to rival, if not surpass their recent efforts. This is a definite must-listen for 2015, especially if you like your music pensive and on the quieter side. If you are ready for a trek in the snow towards your perdition, listen to Sorni Nai and enjoy being there.

When music embodies art, think no further than Kauan.

Written on 07.11.2015 by
Dream Taster
Bringing you reviews of quality music and interesting questions such as: