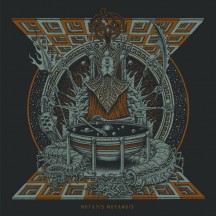 
"Post-black" has always been something of a nebulous term, one that means different things to different people. Some consider it to simply refer to bands that have evolved beyond the origins of black metal, such as Oranssi Pazuzu or Ihsahn's solo work, in the same way that post-punk was a departure from the simplicity of punk rock; others use it to describe blackgaze bands such as Deafheaven, whilst others still (myself included) imagine it to represent a fusion of black metal with post-metal. If one were to consider "post-black metal" to be black metal with explicit post-metal elements, there are few bands I can think of that have combined the two sounds as naturally and as adeptly as Kevel have on Mutatis Mutandis.

Greek outfit Kevel didn't rush to follow up their debut record Hz Of The Unheard, with them taking six years to drop sophomore effort Mutatis Mutandis. In the interim, they have joined the roster of I, Voidhanger Records; those that heard the debut record may have been surprised by this move, given the reputation of said label for putting out metal on the more extreme and avant-garde end of the spectrum. Hz Of The Unheard is described on Kevel's Bandcamp page as an instrumental prog sludge effort, which a quick listen seems to confirm; decent as the album sounds (and it does have fairly obvious rough edges), it doesn't exactly scream "I, Voidhanger". However, the label obviously saw potential, and have been rewarded with what is a seriously impressive step forward from the group on their sophomore album.

The first thing to notice about the difference between the debut album and Mutatis Mutandis is the guitar tone. Hz Of The Unheard was a sludge record and had the dirty sound to go with it; in contrast, even when the songwriting is sludge-inspired, the guitar tone on Mutatis Mutandis is blackened throughout. Beyond the conventions of black metal guitar such as harsh tremolo riffs, the guitar sound has that creepiness that is ubiquitous in the genre; listen to the malevolent clean guitar tones early on in "Of Being" (under which the drums goes on a jazz-inspired frenzy), or the chord choices in the riffs when the song intensifies. Beyond the blackened aesthetic to the music, "Of Being" alternates between rampaging sludgy riffs and murkier dirges, all whilst giving Thanasis Politis a heck of a workout on drums.

"Of Being" is more of a blackened sludge track; "Terraforming" sees some of the post-metal elements that existed on Hz Of The Unheard begin to make themselves known, going from a spacious, atmospheric opening with tom-heavy drumming into a fierce blackened riff, before then gradually slowing down and thickening the sound through the rest of the first half of the song. After all these powerful, huge blackened sludge riffs, the song cuts out, and the second half of the song features atmospheric percussion, spacious clean guitar and sound-filling synths gradually layering and layering, building and building for several minutes before the same fierce blackened riff is revisited. Probably the easiest comparison for this track in terms of bands is earlier Regarde Les Hommes Tomber during their most atmospheric moments. Although the extreme riffs that the band deliver are so good that songs lacking these sonic contrasts (such as "Of Being" or "The Apophatic") don't suffer, Kevel are adept at effectively creating powerful atmospheres during these quiet stretches, which are also utilized on the likes of "Cosmic Domination" and "Utopia Planitia" to great effect.

Backing up a stellar artwork with a quality sound, Kevel mix black and sludge metal masterfully on Mutatis Mutandis and reap the rewards, utilizing post-metal influences in a highly satisfying manner on the longer tracks whilst still ripping hard on the more all-out aggressive tracks. The whole album is of both similar style and quality to Regarde Les Hommes Tomber's finer material, and anyone who knows how much of a fan of the French group I am will recognize that to be strong praise. Kevel have taken a big leap forward in the six years between albums 1 and 2, turning themselves from an unrefined band with raw promise to the real deal.

Written on 08.12.2020 by
musclassia
Hey chief let's talk why not
More reviews by musclassia ››