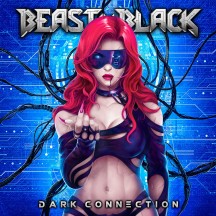 
Berserker was one of the best debuts I ever clapped ears on, one of my highlights of the 2010s – and then, for whatever reason, From Hell With Love just sank for me. This is the all-important third-album test. Can Beast In Black make another Dark Connection?

Well, I know you can’t see from where you’re reading, but as I type this, I’m sporting moon boots, a triple-decker perm, Ray-Bans, a bright pink jumpsuit, and a brand-new tattoo of Roy Batty on my chest. I had none of these things when I started listening to Dark Connection, but I’m easily influenced, and this album is an hour-long retrofuturistic digital scream backed by super-shimmery synthsplosions so decadent that they would make Vangelis consider picking up a banjo instead. I’ve had such trouble defining why From Hell With Love doesn’t cut ice with me, since it is very much the same album as Berserker, and after the immense pleasure and infinite replayability yielded by Berserker, I was legitimately concerned that I had already lost my ability to detect the Beast In Black groove. There’s a very personal sense of relief that comes with hearing just how exciting Dark Connection is, but even if you aren’t me, this album might be the purple-plated, moussed-up, flash-dancing arcade that sets the high score for the year.

Beast In Black’s first two albums were absolutely addicted to synthesizers, as any three-second clip of any track will prove, and yet somehow that wasn’t enough. Where Berserker and From Hell With Love approached the instrument as a useful and stylish mechanism for injecting cheese directly into the bloodstream, Dark Connection has six Yanni-grade banks of keyboards plugged straight into its cyberbrain and pumping disgustingly gorgeous neon pulses of fried cyberpunk nightclub at a rate of 1000 Europe units per minute. This isn’t just music to dance to – it’s music to DDR MAX 2 THE EXTREME to, four all the way through the goddamn floor, zig-zags of strobe lights burning all the way into your synapses, bigger bounces than if you dropped Flubber off Tokyo Tower. Dark Connection sounds denser and heavier than ever before, as if you’re hacking and slashing your way through layers of disco-infested undercity on your way to detonate a frag grenade in the brain of the world-computer megaframe. The last two albums actually sound lean by comparison, and I never thought I’d be looking back at “Beast In Black” or “End Of The World” and thinking, “Gosh, these could use a couple more layers of everything.”

Gang vocals do a lot more of the dirty work around chorus-time, which gives us a bit less time with Anton Kabanen’s trademark screams, but Yannis Papadoupolos continues to increase his voltage in the front; he carries a bit of a rasp on this album, and that huskiness serves to bridge the gap between him and Kabanen while also covering every hook in a beautifully sinful aggression. It’s amusing to note that, between the two covers at the end of the album, it’s the Manowar song that feels more out of place than the Michael Jackson song; after hearing their version of “They Don’t Care About Us,” it’s hilariously obvious just how much Yannis takes after the King of Pop in his vocal delivery.

I’m prepared to say that this is Beast In Black’s strongest album yet; I find Berserker heavily weighted on either end, and I’m still gearing up for a renewed assault on From Hell With Love to convince myself that I like it. Dark Connection is just a straight shot of bruising bigness from start to finish, with none of the filler and twice the octane. It’s a bit weird hearing songs about Blade Runner instead of Berserk, but in case you don’t know this, Blade Runner is an amazing movie. So is Blade Runner 2049. So is Ghost In The Shell. Johnny Mnemonic is... fun. It may be that single-mindedness that takes Dark Connection to a level that From Hell With Love could not ascend to. It may be that now, more so than ever, I feel a concerted projection that Beast In Black is not a Battle Beast offshoot – it’s a band in its own right with its own sound and style. For the nonce I still find the highest highs on Berserker, but Dark Connection puts up serious competition in tunes like “One Night In Tokyo,” “Bella Donna,” “Moonlight Rendezvous,” “Blade Runner,” “Hardcore,” and, well, all of them, and in terms of performance, production, overall sound, and album cohesion, this is definitely the best yet.